The trick of landscaping is in getting all the elements to work together. Colors and forms shouldn’t clash, but instead create a harmonious picture. This can be especially difficult when you need to work with the natural features of the land.

Choosing the right white bark tree shouldn’t be difficult, because there are so many lovely options. This guide introduces you to some of the most interesting examples from around the globe, to give your landscape that touch of elegance.

The gleaming white bark of the paper birch makes it the perfect choice for interesting landscaping. The bark pulls off in thin leaves, which are so white they look like sheets of paper.

This tree is also sometimes known as the white birch, and is native to North America. In the past, Native Americans used the paper birch to make canoes, hence its other nickname: the canoe birch. 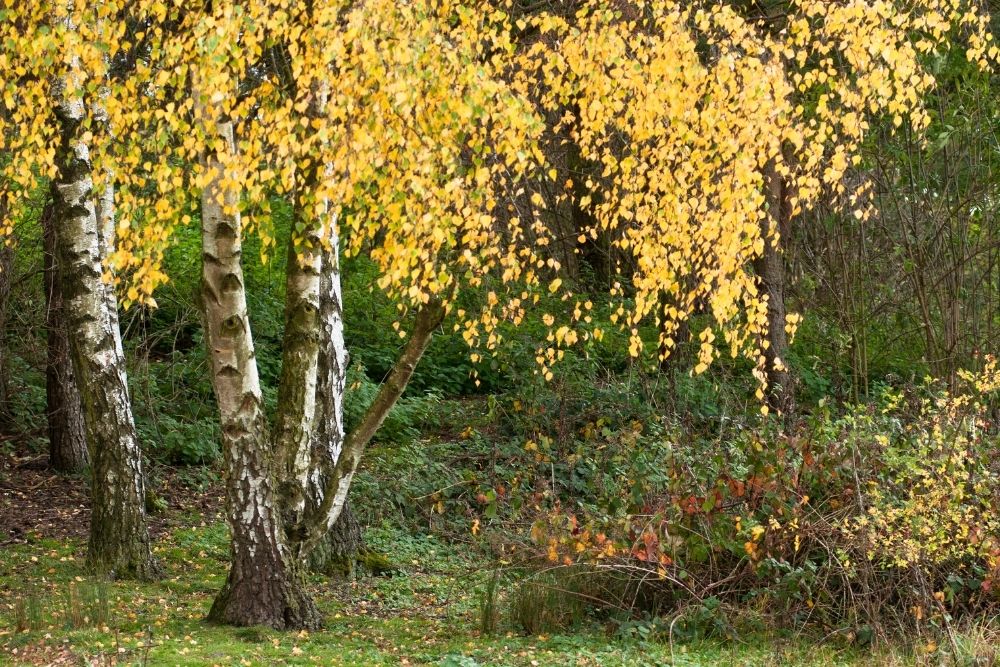 Originally native to Europe, this birch is now cultivated across America, and even Asia due to its ornamental properties. This birch is sometimes referred to as “silver birch” because the bark glows almost metallic in the setting sun.

Although it does make a valuable addition to any landscaping, be careful where you plant it. European birch limbs have a tendency to fall off very suddenly, surprising anyone caught underneath.

The gorgeous pearly white bark of the Himalayan birch was once used as paper, and is still used today for recording scripture. It’s a hardy tree that does well in most soil conditions.

Erman’s birch is an easy growing, low maintenance tree that produces fabulous results. Native to Asia, it looks particularly stunning in winter, when the wide spreading branches are bare.

A hardy birch, it prefers moist and well drained soil, but will tolerate a variety. Plant it in the sun or partial shade, and be dazzled by the glistening white bark.

For landscaping in a cooler climate, the Japanese White Birch is ideal. It requires no pruning and minimal maintenance, but delivers a stunningly sparse effect. The bright white bark peels back to reveal tan strips underneath. In summer, it produces upright green catkins.

In full sunlight and moist conditions, the White Poplar will grow at speed. It reaches a height of roughly 50 to 80 feet, although in some instances it has gotten even taller.

What sets this tree apart is the unusual diamond shaped marks that form on the pale bark. While it may be beautiful, be careful to check your state laws before planting. The White Poplar can be invasive, and is regulated in places.

The gray-toned bark of the European Poplar does make it a striking tree, but landscapers may have to avoid this one. Native to Europe, it’s considered an invasive species in the US.

Able to tolerate all kinds of soil, and even handle flooding, the American Aspen is a classic choice for landscapers. The stunning white bark is offset by the incredible foliage that turns golden bronze before it falls.

It’s also known as the “Quaking Aspen”, because the leaves are known to tremble in even the slightest breeze.

The wide-reaching limbs of the Sycamore has led to it being a popular choice for a shade tree. Given access to open sunlight, the Sycamore will grow quite happily in many types of soil. It grows quickly, and will generally reach a height of 70 to 130 feet.

The thick white bark peels away in chunks, meaning the Sycamore often has coloring in a patchwork effect.

Expect to see the Plane Tree lining the streets of London, where it’s long limbs provide shade in an urban environment.

The Plane Tree is admired as a hardy tree, capable of withstanding the tough conditions of busy city life. The pretty bark isn’t the smooth white of other trees, but a fun mix-up of peeling shades. 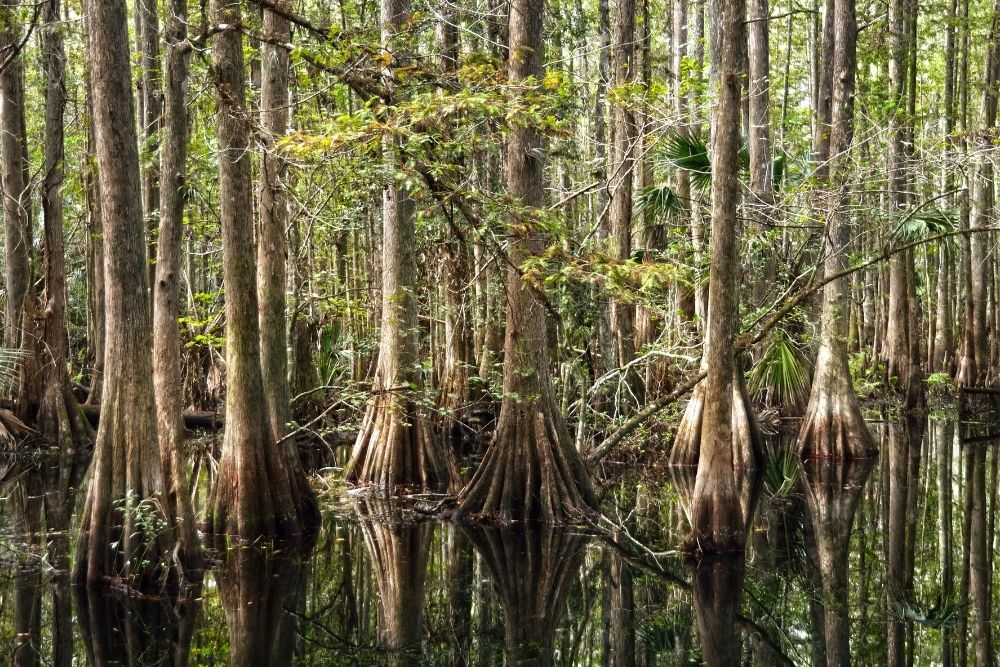 Found in the Florida Everglades and the Bayou of Louisiana, the Bald Cyprus is perhaps less white than some other options on the list. However, the bark is impressive enough that it deserves a mention. These trees are often ancient, with deep reaching root systems.

In a sheltered landscape, the Whitebark Pine can reach a majestic height of 60-feet. However, it tends to look a little worse for wear in its native home. Found in the Rocky Mountains and Sierra Nevada, the old tree clings to the alpine tree line. These harsh conditions cause the Whitebark to bend and dwarf.

Underneath the smooth white coating of this Tasmanian tree lies something of a surprise – a cinnamon colored under bark. This tree is often used by landscapers to give privacy, and its unusual shape makes it a gorgeous ornamental option.

This Australian tree actually enjoys cold climates, and is particularly happy spending several months in snow. The bark is a stark snow-white, making it a popular choice for landscapers. 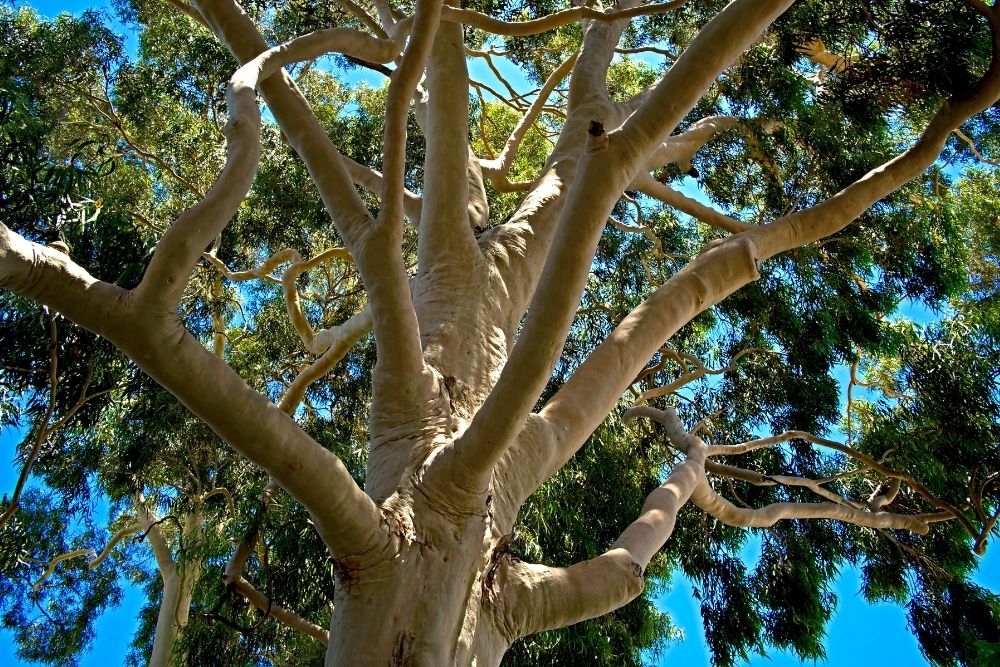 As you may have guessed from the name, the Lemon-Scented Gum is best known for its fabulous scent. The bark is a creamy white that flakes away, and is sometimes infused with notes of pink or blue. Tall and thin, it enjoys the full sun. The warm rays will help the scent to permeate a landscape.

The Ghost Gum is a stunning tree. The smooth, pale bark grows over a long and thin trunk, almost interrupted in color. This tree makes an arresting figure in any landscape.

Native to Australia, it’s perhaps best shown off against an uninterrupted background, where the consistent coloring renders it truly ghostly.

Why use white bark trees?

White bark trees have been appreciated for their elegant appearance for centuries. They add class to any landscape, with the bright bark enhancing the architectural shape of the branches.