The snapdragon flower is in gardens everywhere, admired for its colorful and cheery blooms. Throughout spring and fall, they grow profusely. Their tall stalks light up gardens in vibrant color until the intense heat of summer or frigid winter. We love snapdragons for their variety of colors and stem climbing blooms, but that is not all that draws us to them. Below, we share everything from their meaning to growing tips.

What are Snapdragon Flowers? 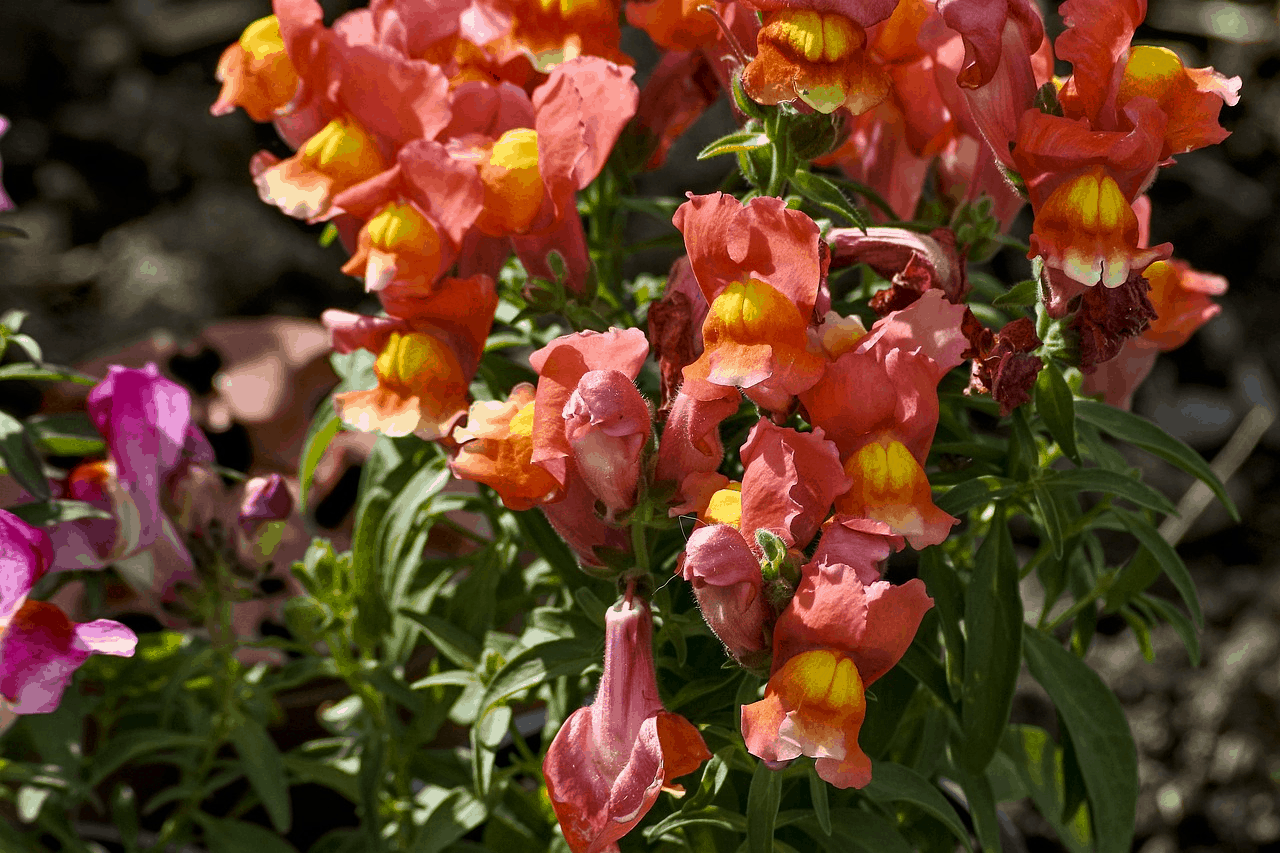 The appearance of all snapdragon varieties is quite similar. They feature colorful petals that fold out dramatically from a thick stem. One or two petals on the top curl upwards sharply, while one or two bottom petals face the ground. Holland calls these beautiful flowers “Lion’s lips”, while parts of Asia call them “Rabbit’s lips”.

These beautiful little flowers have a long and interesting history. Originally native to mountainous and rocky areas of North America, North Africa, and Europe, they are now found all over the world. Easily grown in most regions, garden cultivation has occurred since the 1700s. During those times, witchcraft and boredom were common threats. Many plants and flowers appeared in folklore and legend during this time. The snapdragon flower is no exception.

Take a guess at what meaning snapdragon flowers earned during early cultivations.

Snapdragons get their name from their snapping flowers and dragon mouth shape. These attributes also give us a clue into the mythology and meaning of snapdragons. But it doesn’t give us all the answers.

It’s said that there are three true meanings of snapdragon flowers. These are strength, deviousness, and grace. Much of this centers around the rocky areas where they grow. However, in ancient times, flowers were a way of conveying feelings and messages. Because of this, the use of these flowers plays into so much of their meaning.

The snapdragon’s ability to grow in difficult places made it a symbol of strength. Many sent these flowers to express resilience. They were also sent to help embolden those facing difficulties in their lives.

The snapdragon is stalky and stands tall, even in the wind. For some, it is reminiscent of someone standing proud. It’s a symbol of beauty rising from rough ground. This reminds us of folklore and tales of dragons. They are depicted as scaly and rough, yet they fly through the air with the grace of a bird. Sending the snapdragon as a gift was often a sign of respect or admiration.

As mentioned, flowers convey emotions, almost always in the case of love. During ancient times, snapdragons were a symbol of lust or love. They were sent between lovers, but more often to mistresses. When separated by distance, this was a way to say you were still thinking of them. On the other hand, snapdragons were also used to beg forgiveness from a lover. Because of this, the snapdragon became a symbol of deviousness. 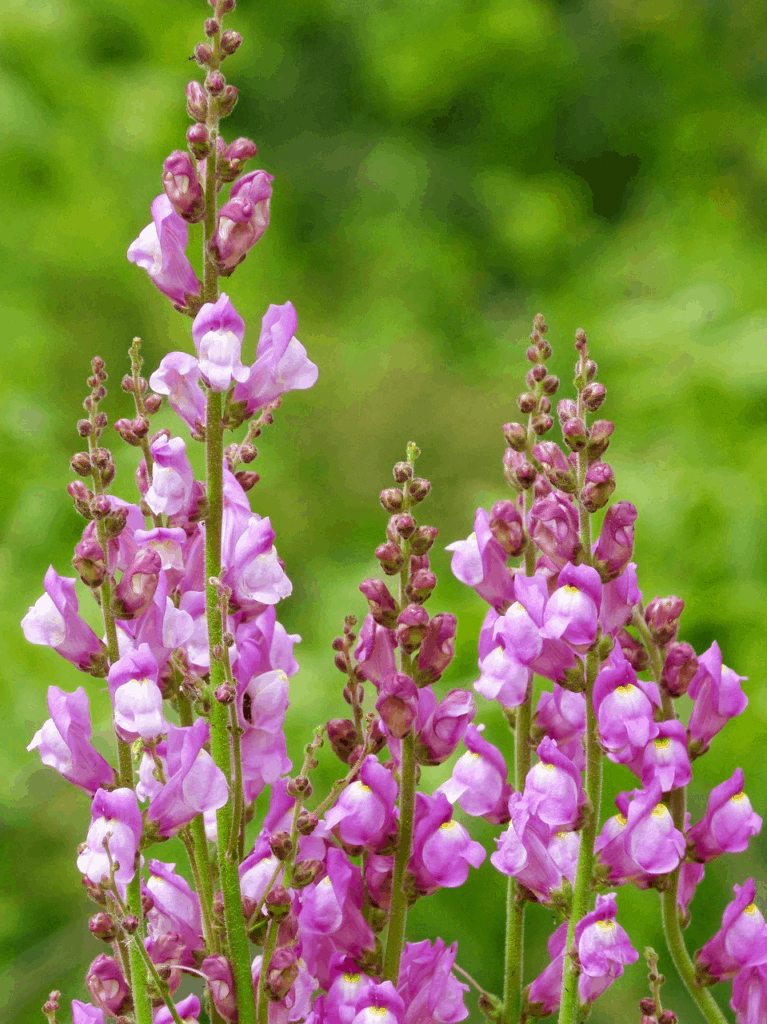 The snapdragon plant belongs to the Plantaginaceae family, a family of plantains. Within this family, there are really only two types. These are the summer snapdragon, also known as the angel flower, and the common snapdragon.

These herbaceous perennials grow an average of 12-18 inches tall. Each stem has several 1-inch blossoms that appear from early June to late September. Their blossoms are usually lilac, purple, or a shade of blue, and carry an apple-like scent.

Unlike summer snapdragons, common snapdragons are typically annuals. Another thing that separates them is that the common type is that can survive winter. Dwarf varieties grow 4-9 inches. Short varieties grow 9-12 inches. Tall varieties can grow up to three feet. These can bloom as early as April and last into winter.

Among these two types, there are approximately 40 species of snapdragons. All have spine-climbing, lip-shaped blossoms, but there are some differences between them. Take a look below at the two most popular types and then discover 16 more kinds!

Rocket snapdragons are a very tall variety, growing up to 36 inches in height. This variety has closely set florets, sturdy stems, and strong heat tolerance. They also come in eight colors, making them a versatile choice for brightening your garden.

The development of bright butterfly snapdragons began in the 1960s to form open-faced flowers. Their petals appear more like an open bell than the characteristic lips of other snapdragons. The flowers, which come in seven colors, cluster together a bit more than other varieties. They still grow tall (up to 3 feet), but not as tall as other varieties. 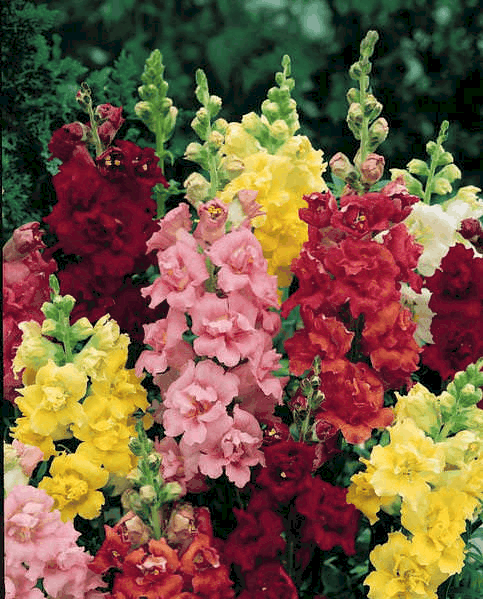 Madame butterfly snapdragons are a cross between rocket and bright butterflies. Their petals are not entirely open-faced, but more so than rocket snapdragons. In fact, madame butterflies have azalea shaped blooms. They are also known to come in deeper colors of red, purple, pink, orange, yellow, white, and lavender.

Sonnet snapdragons are sturdy and easy to grow due to their strong root system. This root system also makes them very tolerant of wet environments. Which is why they bloom as early as April with more traditional flowers in a variety of bright colors. They are a favorite in many gardens.

Though called the “Black Prince”, these snapdragons have dark purple leaves and deep red blossoms. Their stems are sturdy and long, reaching up to 18 inches in height. This variety does better in warmer weather than others and enjoys a lot more sun as well.

Tahiti Snapdragons are of the dwarf variety. However, they are the tallest among others in the same category, growing you to 8 inches. They don’t come in as many colors as other varieties on this list, but they do have bi-colored flowers. For many gardeners, they’re a perfect choice for bedding plants.

Chandelier snapdragons are a trailing plant that appears more like a bush. Their blossoms are a bit smaller than other varieties with leaves and flowers that extend far out to the side. Because of these factors, chandeliers are best in hanging baskets. 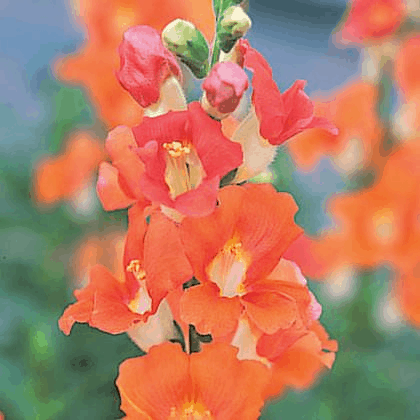 This variety of snapdragon has very fragrant, tightly packed “open” white florets. These butterfly blossoms extend from stocky stems that stretch to twenty inches. You’ll see blooms from La Bella in your garden from early spring to fall.

There are several different snapdragons within the aroma series. Each of them has similar blooms, which grow up to 30 inches tall and 14 inches wide. Their scents and colors are what set them apart. The aroma series consists of: 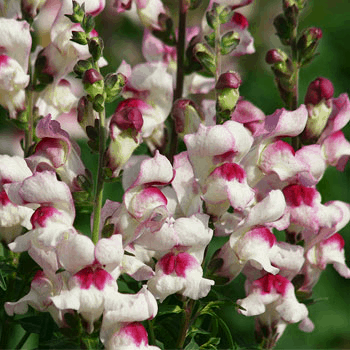 Lucky Lips are one of the most beautiful varieties due to their multicolored petals. These petals are usually white, but at their center have a tongue of deep rose. The rim of each petal is also lined delicately with a cheery pink. Due to their puckered lip shape, you might consider them a romantic touch to your garden.

Chantilly snapdragons have sturdy, trailing stems that stretch up to 40 inches. Their blooms are open-faced, butterfly-shaped, and feature a nice light scent. Their spreading vines and bronzy colors make them a great choice for hanging baskets.

Floral showers snapdragons are extra-dwarfs, reaching only 8 inches in height. However, their blooms can reach at least three inches in width. This makes them exceptional fillers in the garden. They are also heat resistant, uniform, and come in a variety of bright colors.

Liberty Classics have a timeless appeal. A classic snapdragon look. Their strong stems reach 22 inches and come in incredible colors like bronze, lavender, and scarlet. The blooms are quite massive and stand strong, even in the wind. They’re one of the most popular selections for home gardens. 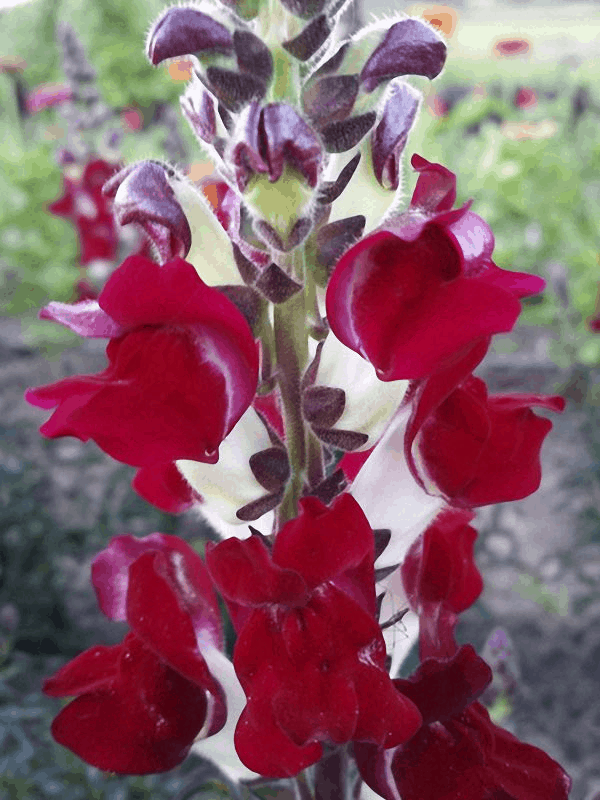 Night and day are similar to the Black Prince, with dark red petals that are almost black. What separates them is their contrasting white jaws. These are also tall snapdragons, reaching heights of 18 inches, and spreading to two feet wide. Their size and bicolored petals make a statement in any garden. 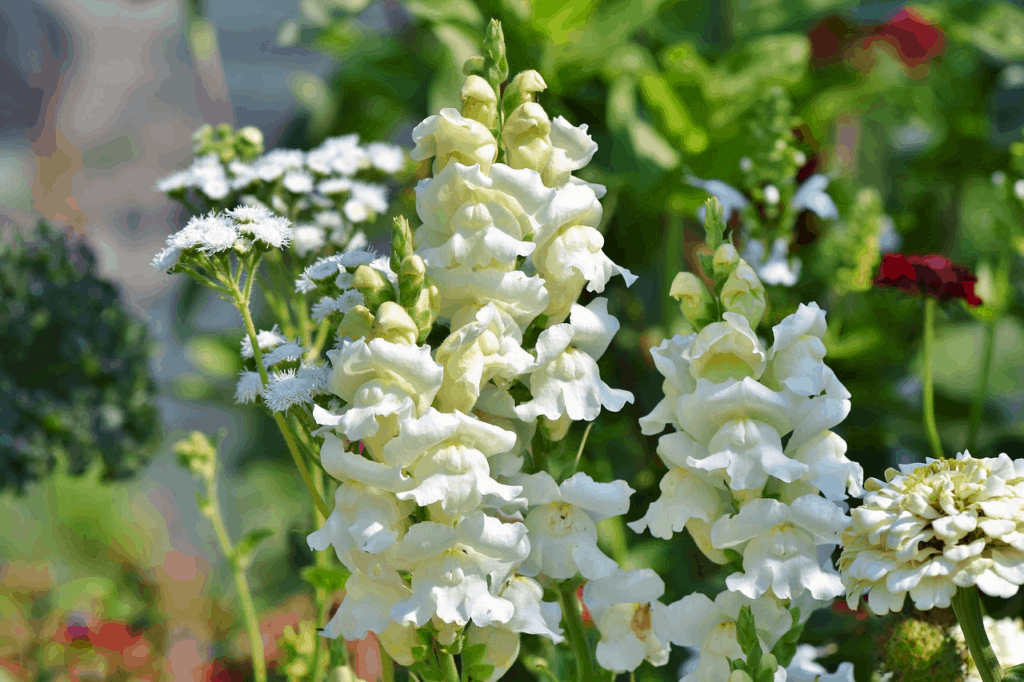 Royal bride snapdragons are an old-fashioned plant. Seen most often in front of English cottages. This variety comes in pure “bride” white with a dash of cream near its stem. These tall flowers reach heights of three feet. They’re also known for their delightful aroma.

Twinny snapdragons are large and incredibly gorgeous.  Their butterfly flowers come in shades of peach, yellow, and orange. They grow to about 12 inches, making them a great choice for raised beds and landscapes.

Frosted flames have an unusual variety of colors. Their leaves come in ivory and green, and their blossoms come in rich pinks, reds, yellows, and cream. There are also bi-colored petals. The leaves are also more narrow than on other types, though still just as sturdy. They reach heights of 18 inches, making them a great choice for containers and borders.

Candy showers are a trailing snapdragon that grow to only 8 inches tall and spread 18 inches. This makes them great in pots, hanging baskets, and as ground cover in your garden. They come in a variety of colors ranging from deep purple and red to yellow and white.

How to Grow Snapdragons 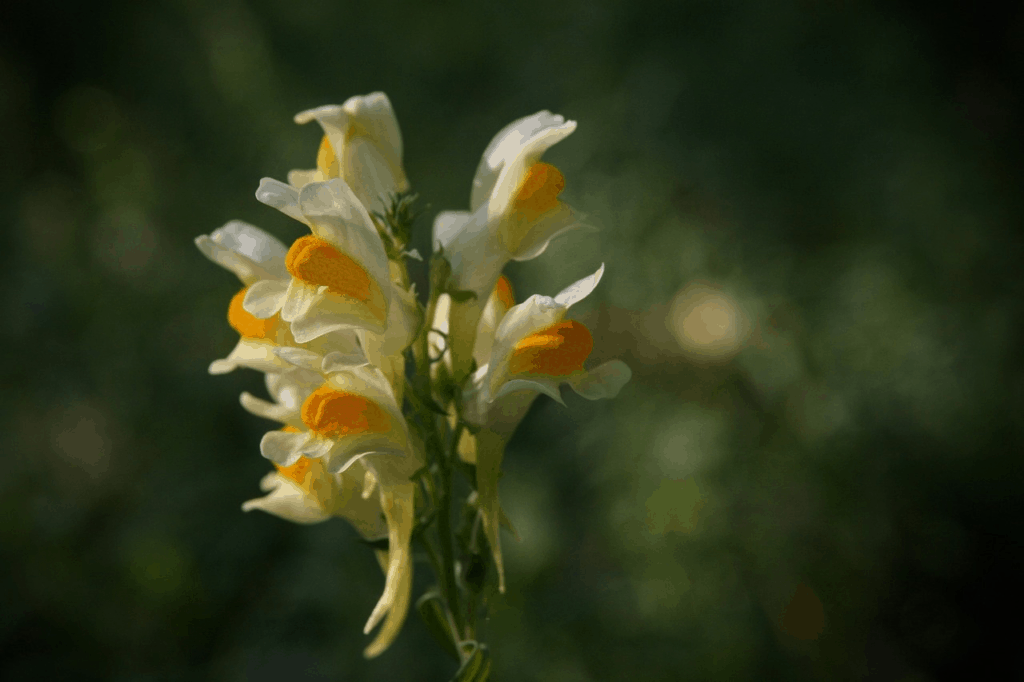 Snapdragons have an easy-to-grow nature and colorful blossoms. This makes them one of the most popular selections for home gardens. Blooming profusely during cold weather, they are also one of the longest-lasting plants. Some varieties are perennials, but most are annuals. However, they can return with proper trimming and do form seed pods during their first year.

Interested in growing these lovely flowers? Consider the following facts:

Growing snapdragons is fairly easy, as they don’t require much care. But there are some things you can do to keep them growing strong and beautiful throughout much of the year.

This flower once found its place in folklore and the hands of mistresses. Now, they’re a prized bloom in our gardens. Learn about other flowers with meaning, flowers with medicinal purposes, and long-blooming flowers at Flower Glossary.