Rhododendron are one of the most vivacious plants you can put in your garden. The name rhododendron is a mix of greek words. Rodon means rose. Dendron means tree. Together, the literal translation of rhododendron is “rose tree”. As a testament to this name, they grow in tall, hardy bushes with clusters of bright flowers. Much like azaleas or hydrangeas. Because of this, they are exceptionally popular flowers.

Get to know the meaning of rhododendron, the most popular varieties, and how to grow them.

What is a Rhododendron? 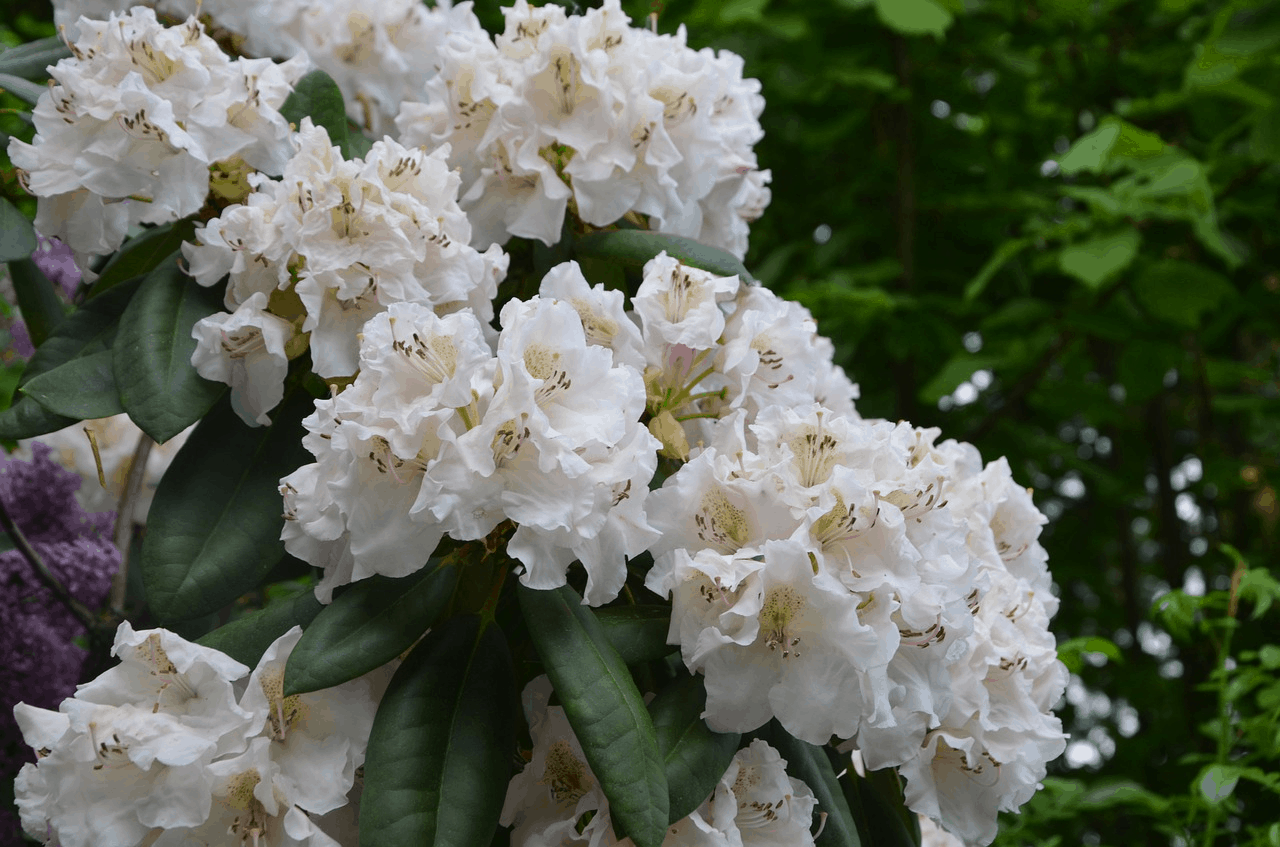 Rhododendrons belong to the Ericaceae (or heath) family. This genus contains more than 1,000 species of woody plants. It includes heathers, laurels, blueberries, and many others. Despite the greek designation as a tree, rhododendrons are actually shrubs. They are either evergreen or deciduous, sometimes wild but most often cultivated.

Their vibrant, bell-shaped flowers cluster to form shrubs almost entirely made of flowers. Most of the 1,000 varieties appear across Asia. Though they also spread through the highlands of the Appalachian Mountains.

History & Meaning of the Rhododendron Flower

Rhododendrons were first discovered in the 16th century, and cultivation began in 1656. They weren’t very popular at first, or at least they weren’t well known. It seems classical writers were the only ones familiar with the species.

In the 17th century, Japan cultivated hybrid rhododendrons. In 1969, a Japanese book called “A Brocade Pillow” classified the color patterns of these flowers. These classifications are still used today. In fact, this is what gives rhododendrons their meanings. You see, the meaning of the flower depends primarily on their color. Since there are several colors of rhododendron, there are several meanings.

Yellow, orange, or red rhododendrons equate with energy, strength, and liveliness. Red is also associated with love, as it is with many other flowers. Yellow is often used in funerals to celebrate the life of the deceased. White flowers mean purity or elegance. Purple is a noble color and holds the meaning of dignity. Blue represents peace and serenity. Green represents health and nature. The meanings of these colors are common for many species of flowers and stand true for rhododendrons as well.

This said, let’s take a look at fifteen of the most popular varieties of rhododendron.

There are over a thousand varieties of rhododendron. But there are only around fifteen varieties that are popularly grown. Actually, in the United Kingdom, rhododendrons grow so prolifically they consider them invasive. However, those that spread so voraciously are hybrids with the rhododendron ponticum. Their spread became such a problem that the U.K. government has even created legislation to halt the growth of this breed. Nurseries have had to phase out their cultivations. They’ve begun developing ornamental varieties that aren’t invasive instead.

There are plenty of ornamental rhododendrons that won’t overtake your garden. These come in three types:

Now that we know the types of rhododendrons, let’s take a look at the fifteen most popular varieties.

We’ve mentioned that there are over 1,000 varieties of rhododendrons. But there are only about fifteen that are commonly grown in the United States. These are grown either by nurseries or home growers. They’re a wonderful choice to plant along fences or blank walls.

If you’re interested in growing rhododendrons, take a look at some of the best varieties to grow below.

Elviira rhododendrons are a low maintenance evergreen shrub that blooms in spring. They grow to only about 2 feet tall and 2 feet wide. This makes them a great choice for borders and mass planting. Their cherry-red flowers are trumpet-shaped and delicately scented. Because they are evergreens, they will stay green throughout winter. However, they need well-drained, highly acidic and organic soil to survive.

Blue Peter rhododendrons are an excellent choice for gardens in most regions. This is because they are both cold hardy and heat resistant, and tolerate sun well. Some cultivars are deciduous and some are evergreen. So their tolerance is dependent on your selection. This variety features violet-blue, tubular, bell-shaped, or funnel-shaped flowers. These grow either singularly or in clusters. Their petals are also frilled, and their shrubbery can grow to 3 meters in height. 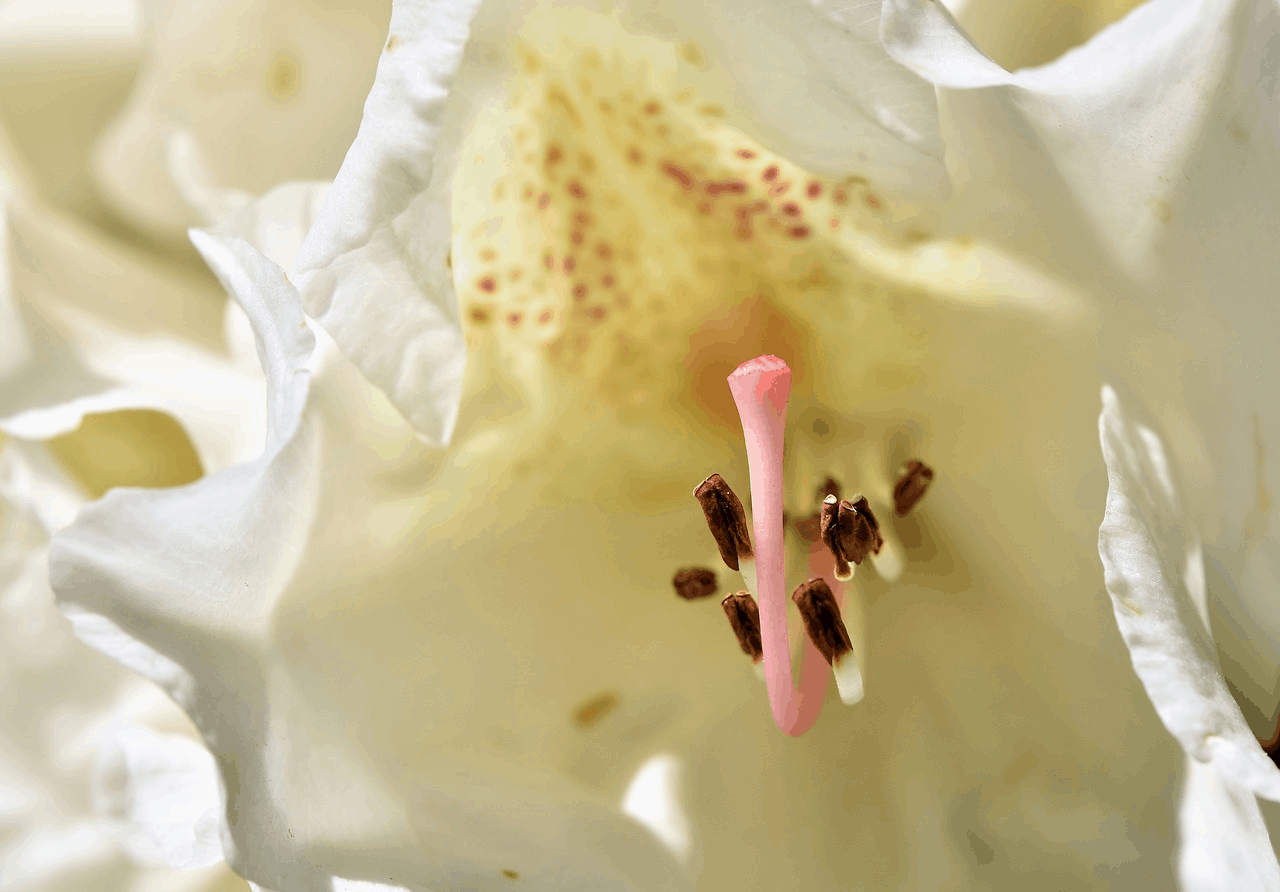 Boule de Neige rhododendrons are a dense, bulbous shrub that grows as tall as 4 meters. Their flowers are unique in that the buds are pink, but their blossoms are white. These pure white flowers have flecks of brown or yellow, creating an artlike appeal. Even more so since these flowers are funnel-shaped. Because of their size and color, they are often used in parks, squares, cemeteries, and even theme parks.

Bow Bells rhododendrons are evergreen shrubs that grow slowly. They reach their max height of three feet in ten years. Their bright pink buds turn pale pink upon flowering. These flowers are bell-shaped and clustered loosely. They’re quite noticeable in any garden. They’re best used as hedging and screens.

Windsong rhododendrons are slow-growing evergreen shrubs, reaching four feet tall in ten years. Their flower buds are a nectarine pink, but as they bloom they turn white. This leaves delicate touches of pink around the edges of the flowers. Some of the less-mature blossoms will retain much more of the pink tone. It’s a beautiful variety, great for any garden. 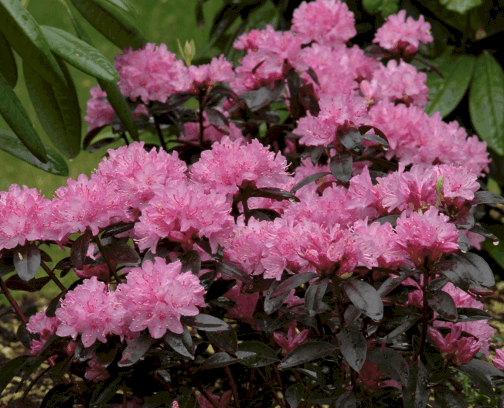 Black Satin rhododendrons are evergreen shrubs that reach heights of 6-feet. Their bell-shaped flowers come in vivid colors of deep pink with coal-black foliage. These black leaves are small, but they are very dense, making the flowers really pop in your garden. They thrive in acidic, well-drained, but moist soil.

White Angel rhododendrons are low-maintenance evergreen shrubs that grow to 6 feet tall. What makes them unique is that they are more compact than other varieties. They also form with a vase-shaped crown. Their flowers are very showy, with large pink buds and white flowers. They grow best in sandy or clay-like soil.

Nova Zembla rhododendrons are popular for their vibrant red flowers and incredible size. Their shrubbery grows up to 8-feet tall and 7-feet wide. Their trumpet-shaped flowers form in very large trusses, though they can grow solitarily. They grow best in well-drained, acidic, damp soil. 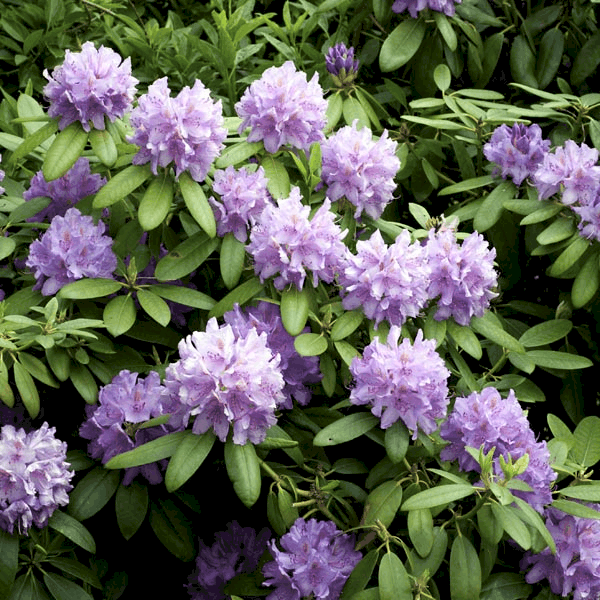 The Catawba rhododendron bush is evergreen and massive. They reach heights of 8-feet and spread up to 6-feet. Their flowers come in a variety of colors- white, pink, red, or purple. These flowers are commonly found in the southern Appalachians. But they’re pretty hardy through most regions. They look best when used along hedges or fences and planted en masse.

P.J.M, rhododendrons are one of the hardiest varieties. They can withstand heat, sunlight, and freezing temperatures. Thus, they are one of the most popularly grown varieties. Their flowers come in either white or a pink-purple combination. They don’t grow as tall as other varieties, reaching heights of only 4-feet. But this makes them ideal for rock gardens and as a less obtrusive feature in the garden.

This variety is a hybrid between the Rhododendron and the Gable Stewartsonian. It is an evergreen that grows to around 5 feet tall, 5 feet wide. Its red flowers are incredibly vibrant, covering the bush entirely. You’ll see very little of its green foliage. During winter the foliage turns a mahogany color. This makes it a great addition for year-round and fall gardens.

The Blaauw’s Pink is an evergreen azalea bush that reaches heights of 5 feet but grows to 6 feet wide. It grows best in partial shade and well-drained soil. Like the Stewartsonian, most of the foliage hides behind clusters of flowers. As the name suggests, this variety has soft pink flowers. While you’ll see many shades of this pink, they’re always on the light side. 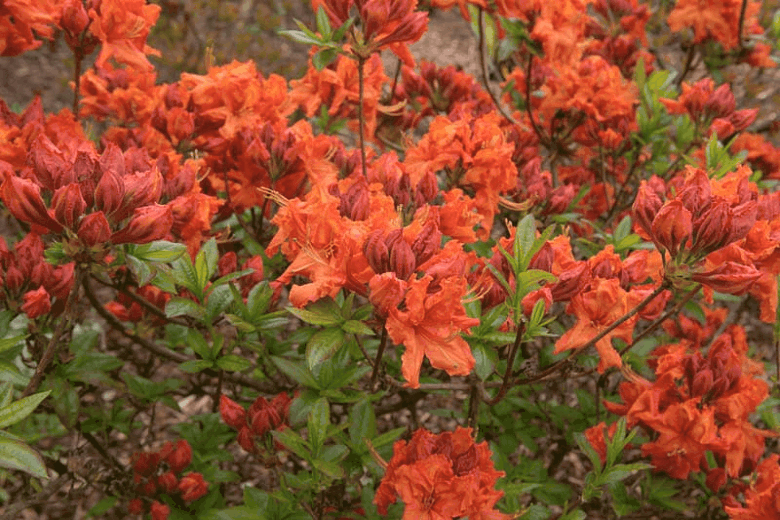 Gibraltar rhododendrons are a shrub that grows to 6 feet tall and 5 feet wide. It features vibrant, frill-lobed orange flowers that form in ball-shaped trusses. They grow best in well-drained soil to avoid root rot. They also enjoy acidic soil and a fair amount of sun. They’re best alongside a building or fence with morning light and protection from wind.

Golden Oriole rhododendrons are actually a hybrid azalea. It has been extensively cross-bred since the 1800s. It grows to 6 feet tall with leaves that turn several shades of bronze in the fall. During spring, this shrub comes alive with vibrant golden yellow flowers. They’re incredibly eye-catching since they cover most of the dense foliage below them.

Bloom-a-Thon rhododendrons are another hardy azalea shrub with evergreen foliage. They will bloom twice a year, first in early April, and again in early July with vibrant pink flowers. The bush itself reaches 4 feet in height and spreads about 4 feet wide. They’re resistant to high summer heat and will remain showy until the fall frost hits. 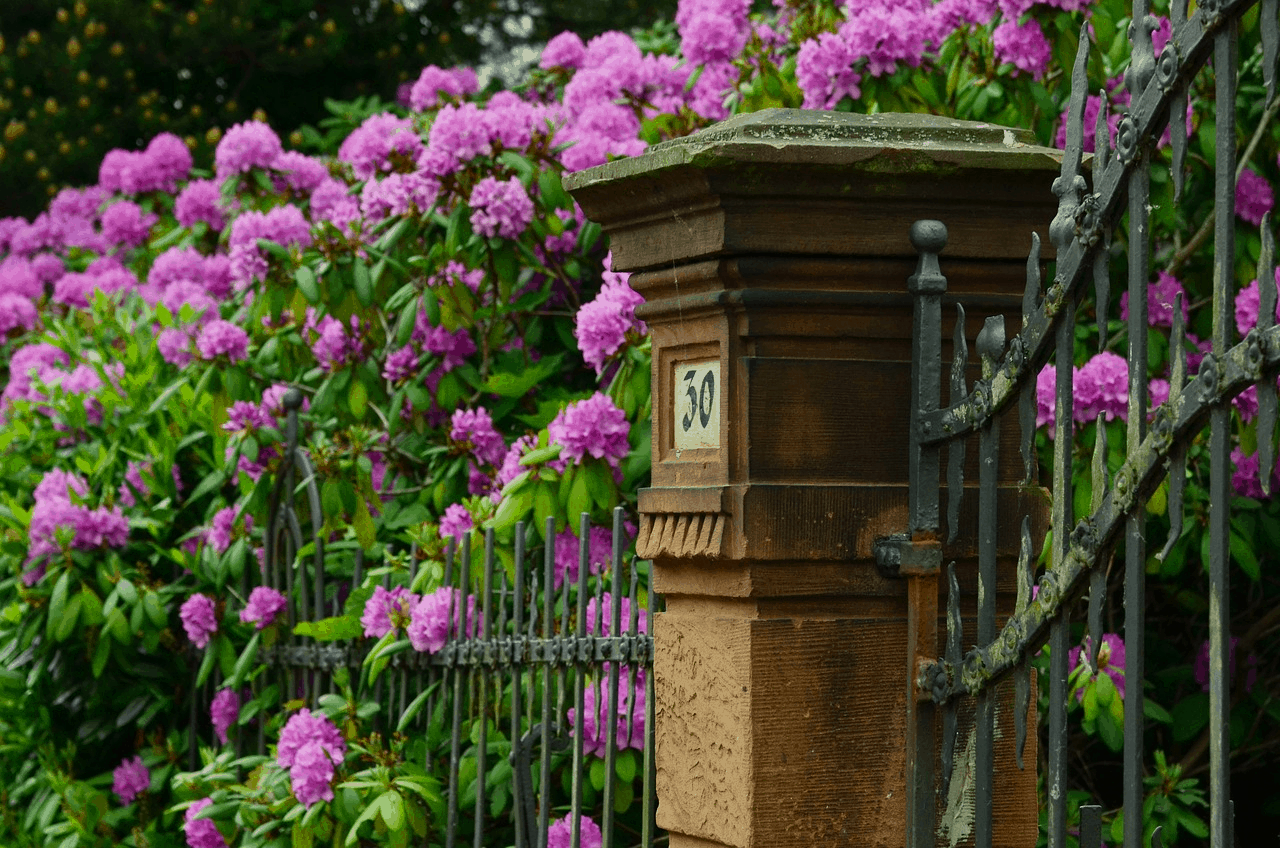 How to Grow Rhododendrons

Growing rhododendrons is rather easy. Most varieties are evergreen and hardy to the elements. However, their roots seldom grow deeper than 12 inches below the surface. And, many varieties need highly acidic soil to survive. So, while they are low maintenance, they still require special consideration when planting. Take a look at what they need, below.

Rhododendrons and azaleas are some of the most vibrant and showy plants you can put in your garden. They’re loved not just for their vividly colored flowers, as well as their size. They’re great for filling large gardens, and for hedges and borders. Learn about other flowers to fill your garden with, such as the best shade perennials, at Flower Glossary.