Something is stirring in the air: a rotten smell. It’s the pungent scent of death. But this odor isn’t coming from roadkill. It comes from the most unlikely source – a flower. The corpse flower, to be exact. It’s one of the most unique and unusual flowers in the world, yet it’s probably the last thing you want in your garden.

In fact, there are very few gardens that grow corpse flowers. There are only 100 recorded cultivated corpse flowers around the world. Most of them appear at universities or botanical gardens, where they draw huge crowds. Below, we’ll share some exciting facts, and explain why it has such a stinky reputation.

What is a Corpse Flower? 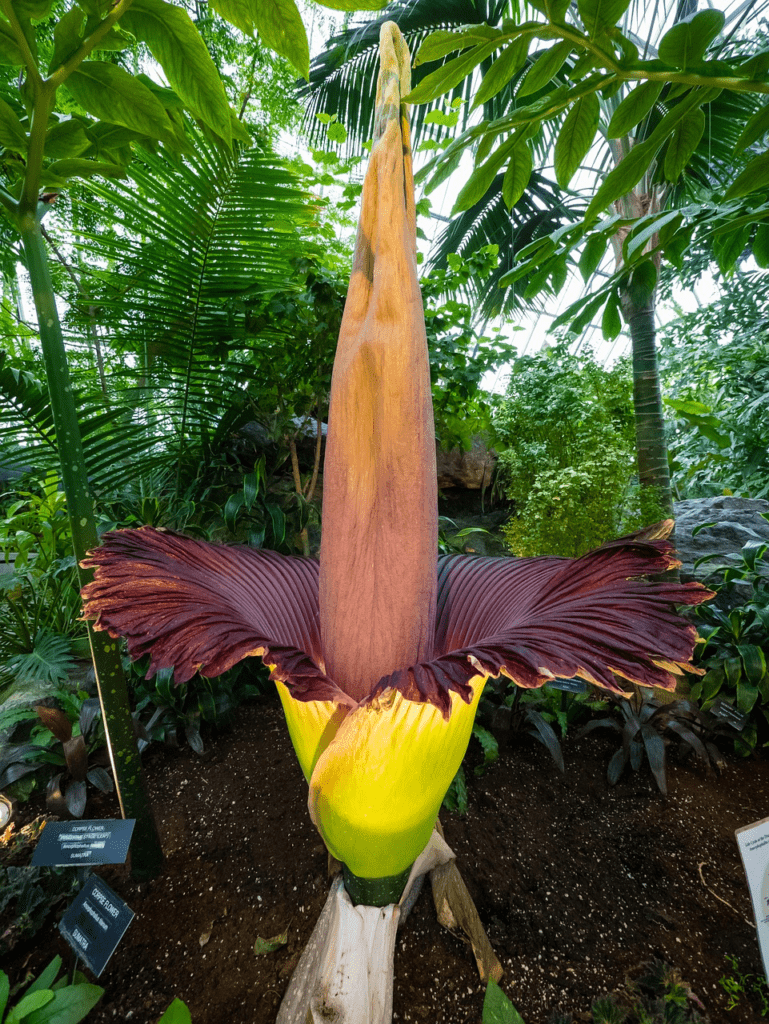 Everything about the corpse flower is stinky, including its scientific name, Amorphophallus titanum. Translated, it means “misshapen giant phallus.” The name is due to its large spadix (the tall part in the center), which sprouts out of a massive, cup-shaped skirt. This large spadix can grow ten to twenty feet tall, making it the tallest flower in the world. Interestingly, the corpse flower is not a flower at all. It is an inflorescence, a floral structure made of many smaller flowers.

Corpse Flower Facts That Will Surprise You

Many things make the corpse flower interesting. However, these corpse flower facts also clue us into how rare and unique this flower is. Get the details about this smelly plant below.

While the flower’s scientific name comes from its size, its common name, “corpse flower,” comes from its smell. The scent is reminiscent of rotting animals and is so strong that few people can last long around it. Even stranger, the flower disperses its scent by heating up to 98 degrees Fahrenheit. The same temperature as the human body. We may think it’s stinky, but the scent benefits the corpse plant by attracting pollinators.

What Creates the Corpse Flower’s Smell? 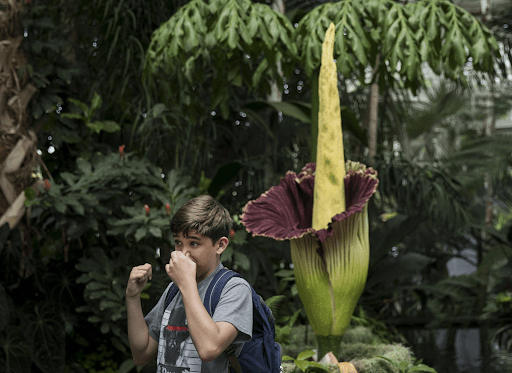 The corpse flower releases a powerful smell during its blooming and mating time. Some describe it as funky cheese or garlic that has rotted. Others smell rotting meat or dead animals. In fact, the corpse flower excretes over 30 chemicals to produce its unique scent. This happens in pulses because a continuous stream would deplete too much energy. These chemicals include sulfides, isovaleric acid, methyl thioacetate, and trimethylamine. In other words, the smell of rotten eggs, stinky feet, stale beer, and rotting fish.

These chemicals create a nasty stink that attracts pollinators like flies and beetles. These bugs often lay their eggs on dead animals. The flower’s stink makes them believe that it’s a good place to lay. Once they realize it’s not a dead animal, the insects leave, covered in corpse flower pollen. If the plant is lucky, the flies will travel to another receptive corpse flower.

Another interesting thing is that this plant contains both male and female flowers. Around the base of the plant’s spadix, you will see yellow sacs. These are the male flowers, which will burst with pollen during blooming periods. Below the males are the females – purple stamen topped with orange globes.

A Corpse Flower Bloom Is Rare

Blooming periods for a corpse flower come once every seven to ten years and only last for 24 hours. Complicating their reproduction further is the fact that a single plant cannot mate with itself. It needs another corpse flower to pollinate due to the different blooming times of the flowers.

Female flowers within a corpse plant bloom first, becoming sticky to trap pollen. Male flowers release their pollen hours later. By this time, the female flowers are no longer fertile. This means the plant must acquire new genetic material, which helps to produce stronger offspring. This is why the flower must produce such a strong scent. Pollinators such as flies, that come from a distance are their best chance at survival.

Despite being the largest flower in the world, the corpse flower is vulnerable. Not to weather, but to poachers. In their native Sumatra, India, poachers, and deforestation threaten the flower’s population. So far, they’ve lost 72% of their native tropical rainforests in Indonesia. It doesn’t help that the corpse flower isn’t a house plant. Because of its size and unpleasant smell, it is unreasonable to grow in a home garden. They tend to fare better in university and botanical gardens.

When a corpse flower blooms in a botanical garden, there are rarely mates in the vicinity. For this reason, caretakers cut a small hole into the skirt where the male flowers grow. They scrape out the seeds and use them to pollinate the females. While this works to keep the population going, it can stress the flower out. It takes a lot of effort for it to create pollen, and over-cultivation may kill it.

It Is Not the Biggest Flower in the World 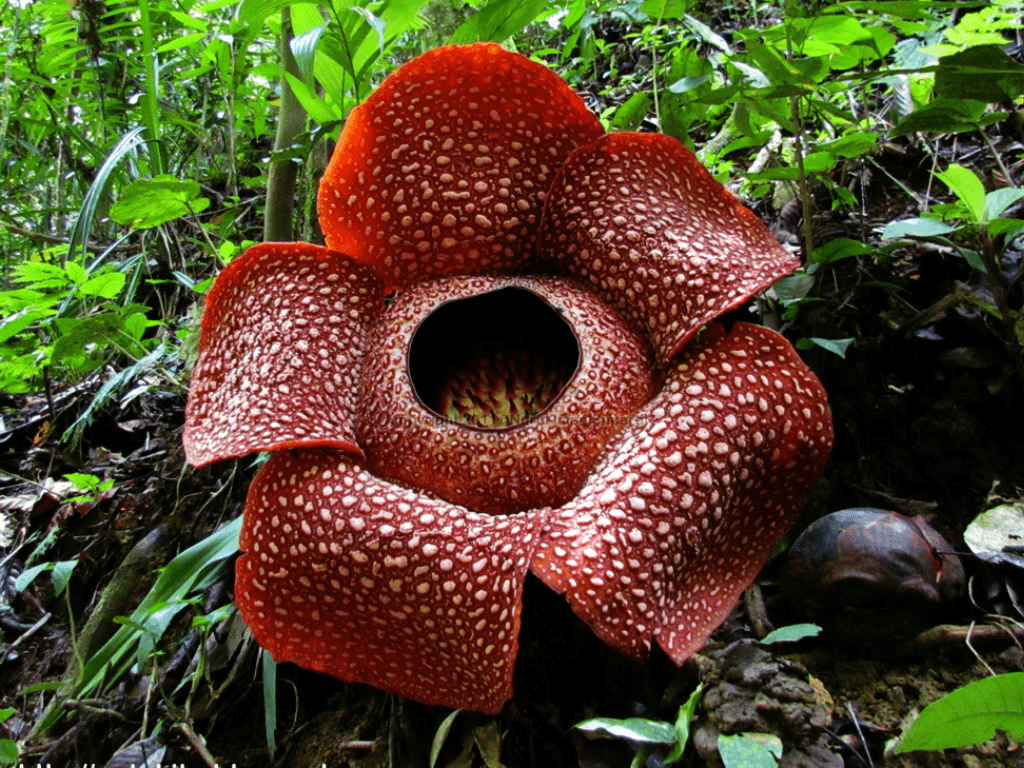 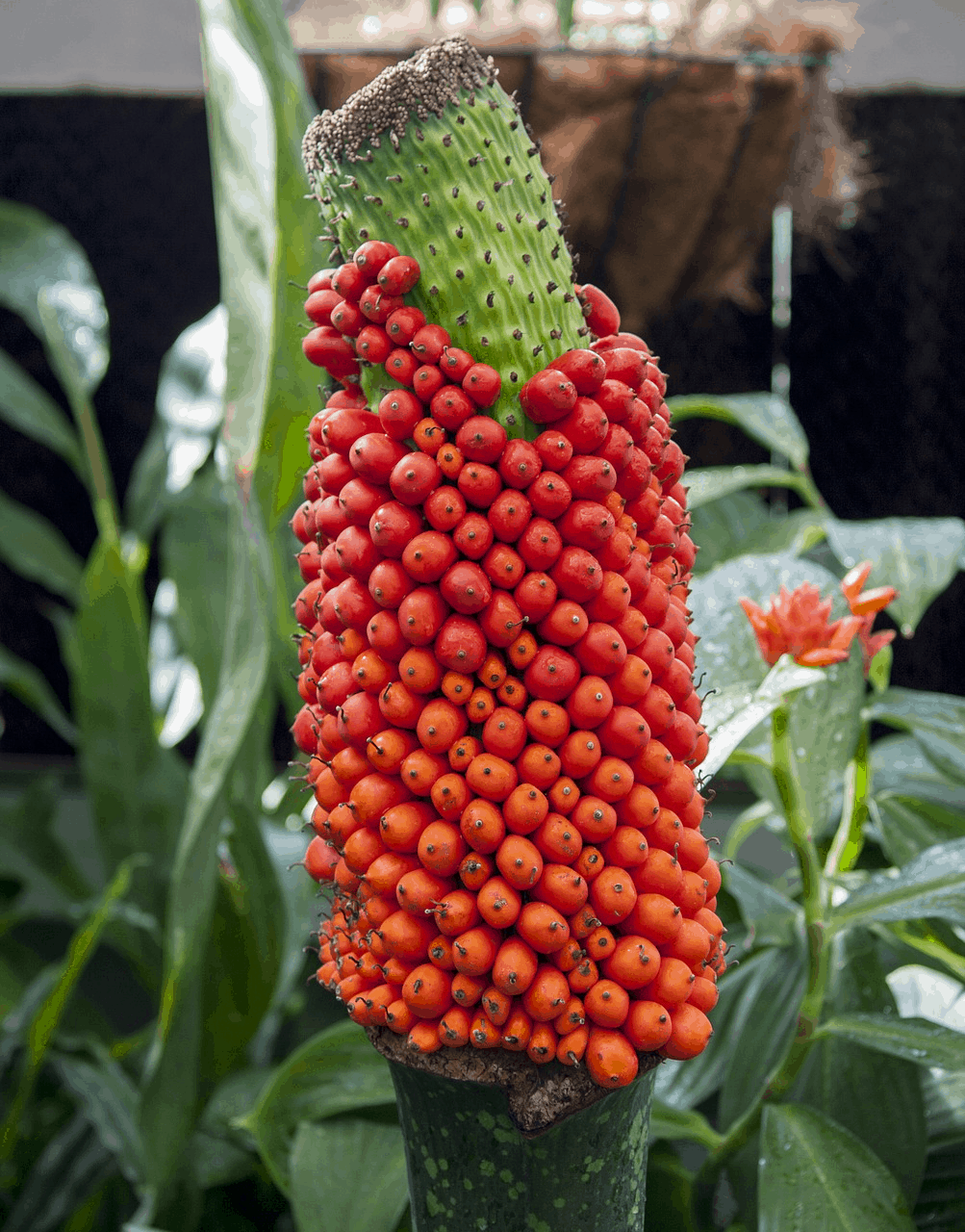 A corpse flower doesn’t die after it’s finished blooming. Instead, it collapses into itself and produces hundreds of small, berry-like fruits. Humans can’t eat them, but several species of birds devour these brightly colored fruits.

After ripening, the seeds darken to a deep red. This lasts throughout the corpse flower’s dormant six months. Following this, the spadix (phallic center) sprouts like a thick leaf. With each cycle, this will grow larger and larger until its next blooming cycle. Again, this is a process that can take up to ten years.

The Corpse Flower Was ‘Discovered’ in 1878

1878 is the year western scientists learned of the Titan Arum, thanks to Odoardo Beccari. Beccari, an Italian botanist, found the plant in the Sumatran rainforests. His records indicate that the plant was five feet in diameter and ten feet high.

When he tried to bring some of the flowering tubers to Europe, customs wouldn’t let them through. Some of the seeds survived and were then taken to the Kew Botanical Gardens in England. In 1889, the gardens saw their first bloom of the flower. In 1926, they saw their second bloom. The only change from the first to the second bloom was the size of the crowds. The flower was such a popular attraction the police had to be called in to control the crowd.

The Corpse Flower Offended the English

It is no secret that the corpse flower draws huge crowds, even today. When it first reached the western world, it quickly caught the attention of the public. An artist was even hired to illustrate the plant. However, the artist had difficulty completing the project due to becoming ill. The phallic appearance of the plant was often considered distasteful in proper society. So much so, in fact, that governesses strictly forbade young ladies from viewing the plant.

The Corpse Flower Drinks A LOT

While this flower is not suitable for home gardens, many are curious about how to grow corpse flowers.  These are some of the hardest flowers to grow, so they aren’t for the faint of heart. Growing ten feet tall is very taxing, and requires a lot of sustenance.

If it is grown out of the tropical rainforests of Sumatra, it must stay at a humidity of 80 percent. Temperatures need to be above 75 degrees. The soil must be moist but not soggy. Every dormant period each year, repotting must take place. The plant must have good light but not full strength. Partial shade or light filtered through other plants or trees is ideal. In addition to these conditions, you must also water the corpse flower accurately. The soil must remain moist down to its roots, but not drowned. Because it is from a tropical region, it will drink up that water quickly.

With all of this in mind, we can see that this is a high maintenance plant. It may be best to leave the growing to the botanical gardens. We can admire them during their blooming season instead.

The corpse flower is an interesting plant with a rare bloom and stomach-churning scent. It’s worth a viewing if you’re near a botanical garden that has one. While you’re waiting for its next bloom, check out other interesting flowers with meaning at Flower Glossary.