Chrysanthemums are a part of the history of the world, appearing as far back as the 15th century in China. There, legends tell of the plant’s use as a headache remedy. It was also an addition to salads and festive drinks according to the National Chrysanthemum Society. In this post, we’ll share information about different types of chrysanthemums (also known as mums) along with growing tips.

On ancient Chinese pottery, chrysanthemums look much as they do today. They’re quite similar to daisies. But throughout the centuries, as this daisy-like flower has passed from one grower to the next. As time progressed, different species (20,000 species, 1,000 genera) emerged. Mums of today are unrecognizable from their origins. Still, chrysanthemums, also known as mums, are widely grown in fall gardens.

Learn how to grow chrysanthemums with our quick guide below.

Mums flowers are actually a type of daisy. This is why they often bear resemblance to the charming little flowers. Officially, they belong to the Compositae (Asteraceae) family. We know this tropical plant that blooms in the fall for its wide range of colors. They come in every color from snow white to sun-kissed bronze.

These lovely fall flowers are also characterized by their ray or disc florets. The florets make the flowers look like they hold a multitude of petals. Disc florets create the center buttons of chrysanthemums. Ray florets expand around outer edges with the appearance of petals. When they’re clustered, they’re called a mum bloom.

There are approximately 100 cultivars of chrysanthemum grown in the United States. The following characteristics create 13 different types of mums: 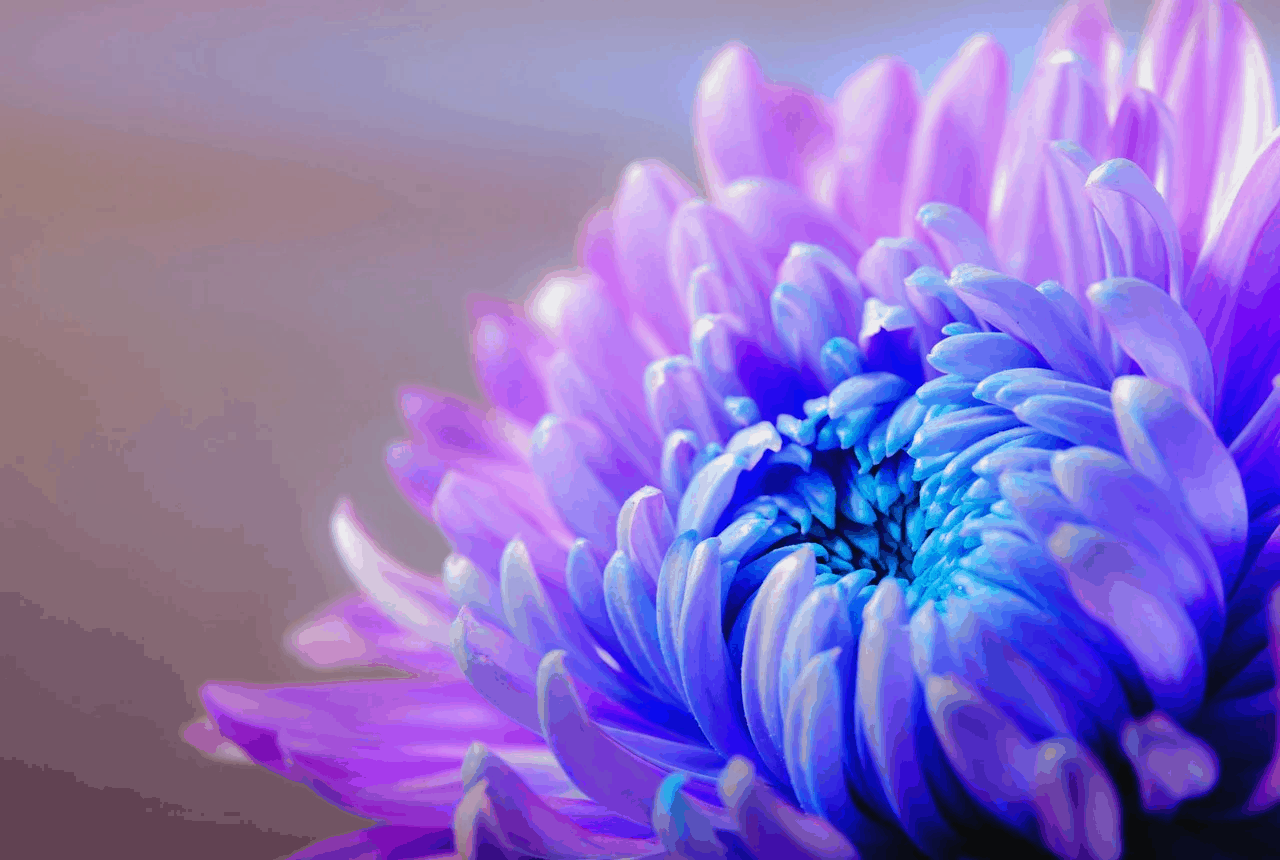 Incurved chrysanthemums have thick florets that curve inward. They often have larger heads and irregular petals, which often give them a less uniform, sometimes fluffy appearance. Their average height is 6-8 inches, and come in a multitude of colors and varieties.

There are three different incurve categories- irregular, intermediate, and regular.

Irregular incurve mums feature large blooms with inward curving florets that cover their centers. A few florets come trail below to create a light fringe around the stem.

A mum with a regular incurve is a lot like those with an irregular incurve, with a few minor exceptions. They possess the same tight florets and covered center blossom. But, their florets create a more consistent ball shape. They also only grow between 4 and 6 inches in diameter.

Reflex mums, like incurved mums, create globe-like blooms. But their florets curve downwards from a flat center, looking almost like feathers. These blooms only grow to about 4-5 inches, and are more often in a shade of orange or red than any other colors. An anemone has a central disc surrounded by florets and a cushioned appearance. The florets are long and tubular, and the center is button-like. Anemones are one of the closest chrysanthemums in appearance to a daisy.

Single mums are a cross between reflex mums and anemones. They feature one or two rounds of ray florets that droop down from a flat, compact center. Single mums can grow between 1-3 feet though, and their florets don’t curve as much. They still look like daisies, but a bit bushier. 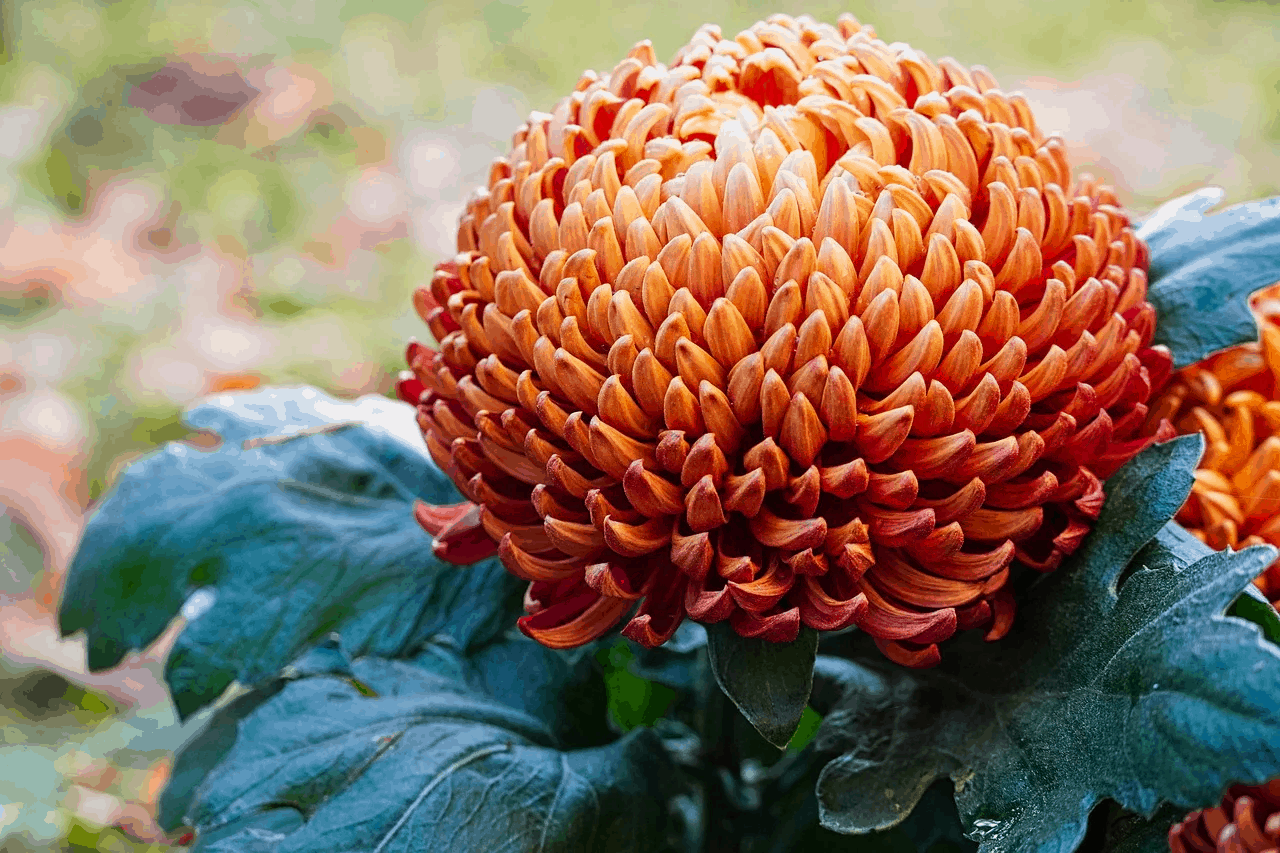 Pom pom mums grow quite small, only 1-4 inches in diameter, but their tight blooms are quite impactful. The florets don’t droop, and their small nature only allows them to incurve slightly. But they do form a globe-like bloom that contributes to its name. Decorative mums are often used in floral arrangements due to their 5-inch blooms. Their florets that increase in length from the center outward, adding to their beauty. The top of the bloom is also flat and cushion-like, with florets that curve only slightly inward. 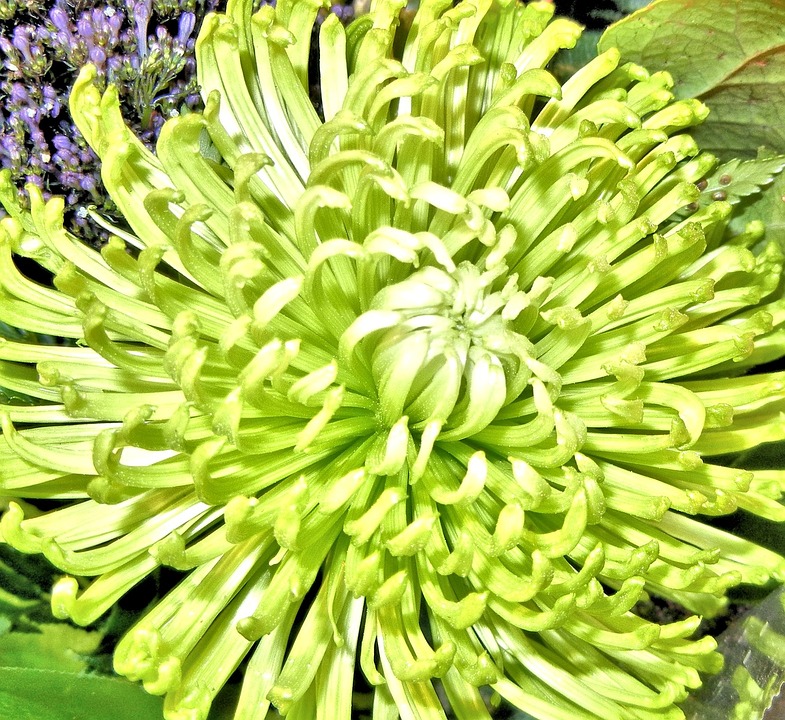 Spider mums have tubular spiky florets that stretch out in all directions. Occasionally, these florets will curl or hook at their ends. The florets around the edge often droop downward, resembling spider legs. 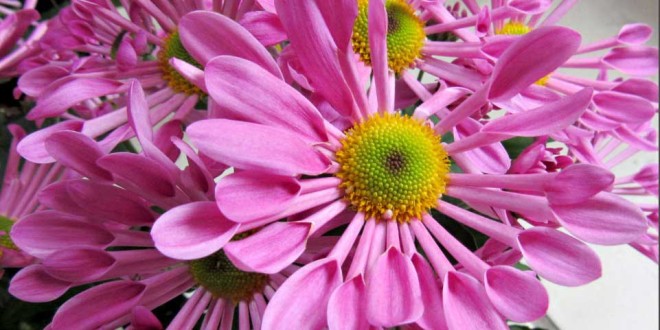 Spoon mums look rather similar to single chrysanthemums. They’re separated by a slight, spoon-like curve at the end of each floret. The center disc of the blossom is button-like and very flat. 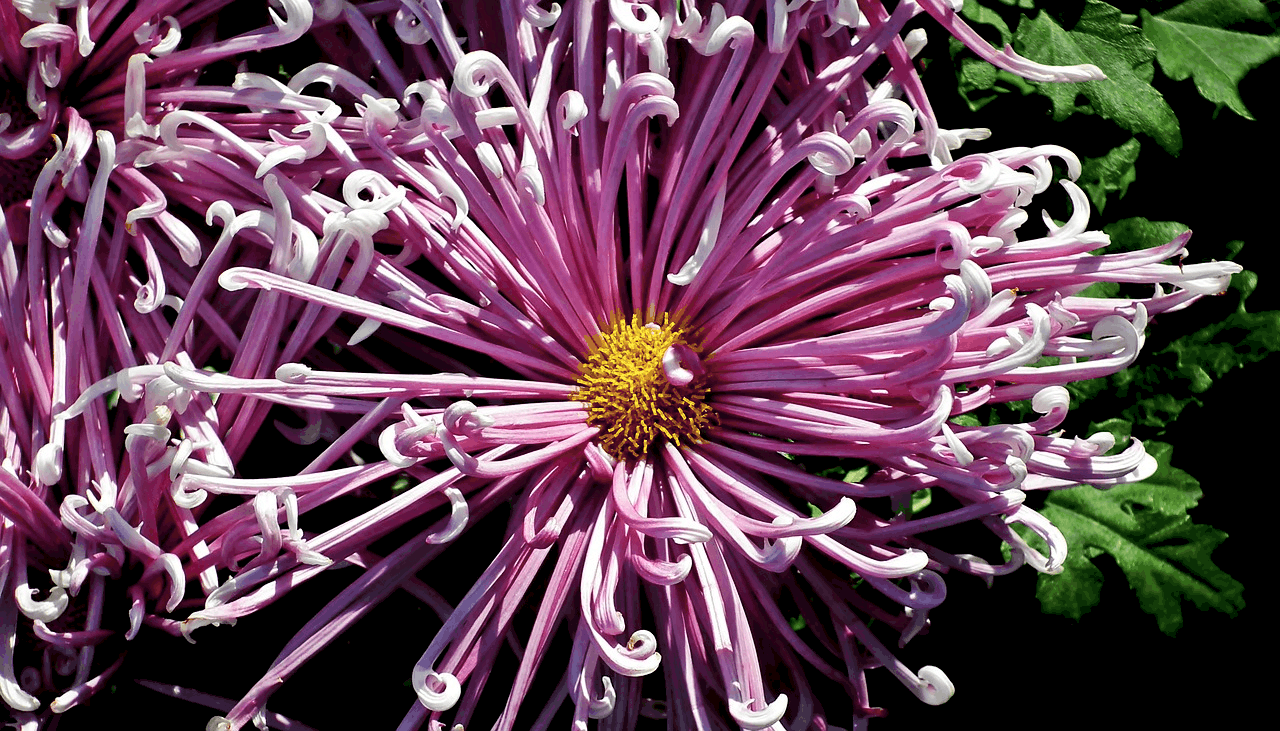 Quilled mums feature long, tubular florets that transition from a slight spoon shape to a downward curve. These florets often resemble a quill. The florets are thin and spiky, and often get confused with other types of chrysanthemums. 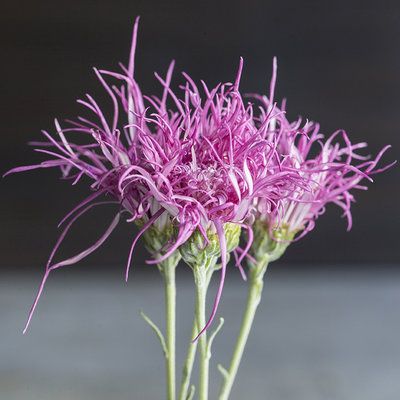 These chrysanthemums are sometimes called bush blooms They feature multi-colored blooms with long, thin florets. These either twist to become incursive or slope downwards. This wild and multicolored bloom has a rather exotic look that makes a unique addition to any garden.

As mentioned earlier, there are about 20,000 species, with 100 cultivars in the United States alone. Amongst these are several varieties that are quite unique. There are simply too many chrysanthemum varieties to place.

How To Grow Chrysanthemums

Chrysanthemums bloom in late summer and last through fall. Plant chrysanthemums from seed indoors in early spring to allow for a proper root system to grow. This will ensure that your mum plant lasts through the fall and will rise again on its own next year.

When to plant mums: Plant in early spring, in indoor pots.

Planting mums: Chrysanthemums thrive in well-drained soil. Keep consistent moisture, to ensure roots can establish themselves. Plant them like any other perennial- spaced about 12 inches apart.

Sunlight requirements: Chrysanthemums are sun-loving but they can survive on 6 hours of light a day. The more light they get though, the better.

Mums care: Mums are low-maintenance, but they need well-drained soil. They will rot if they are in standing water. Adding compost or peat moss helps to loosen the soil. If growing in pots, give them supplemental fertilizer. We recommend early morning watering to a depth of 6-8 inches.

Pruning mums: By pinching and pruning before the middle of summer, you can double the number of buds that will grow in the fall.

Chrysanthemums are interesting flowers that make unique additions to any fall garden. To learn of other fall garden plants, low shade perennials, and flowers that last through fall and winter, go to Flower Glossary. We have everything you need to keep your garden looking beautiful year after year.