Flowers have a language all their own. In Victorian times, receiving a bouquet was every bit as expressive as receiving a letter or card. Today, most people are unaware of the less common flower meanings, but almost everyone you meet can tell you that red roses are a symbol of love. But how did this association begin? And are there further meanings to uncover?

The Meaning of Red Roses

Red roses mean love, right? Mystery solved. But like love itself, there are many different nuances to be understood if you have the inclination. The setting is an important part of the message. Red roses used in a bridal bouquet may signify marital bliss or mutual respect and admiration. Red rosebuds can symbolize purity and loveliness along with romantic love. And presenting your love with a preserved red rose can symbolize your wish to preserve the love and passion you share.

There are different nuances to the meaning of red roses, depending on how many blooms are presented. A single red rose is a more pure way of saying “I love you,” especially appropriate for young love or a brand new relationship. Two roses intertwined are a traditional symbol for a marriage proposal. Six roses may convey a desire for love. Eleven roses are a way of reassuring your partner that your love is both true and deep. A dozen red roses are the traditional symbol of true love. And if you’re presented with thirteen red roses, don’t expect to see a signature on the card – this is the symbol of a secret admirer. 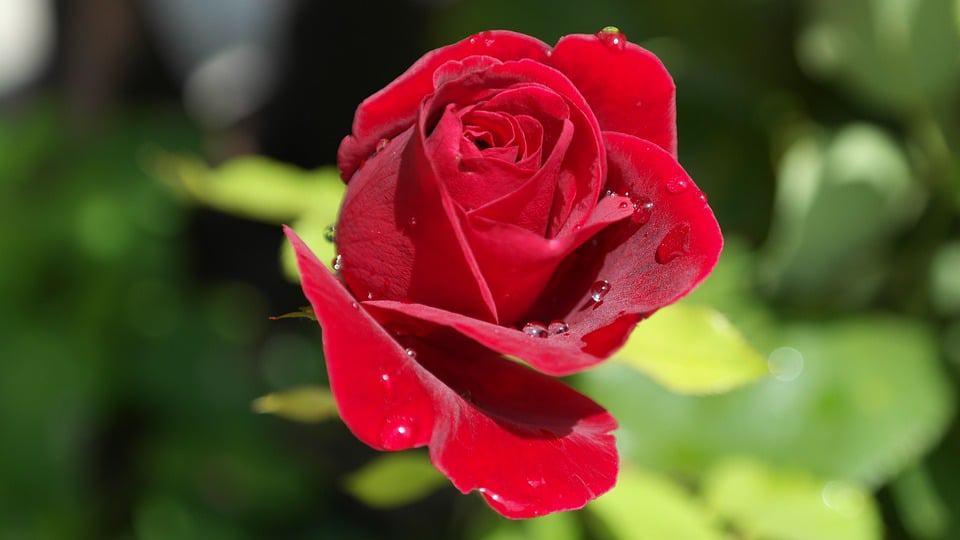 Likewise, the specific shade of rose can convey meaning too. Bright red roses, sometimes called “the lover’s rose” actually stand for enduring passion (as opposed to the type of love you feel for family or close friends). A deeper shade of red conveys feelings that have been kept secret until now. These darker shades can also suggest you are now ready to commit to a relationship.  If you think that red roses might be a bit too romantic, consider sending pink roses instead.

Roses are one of the most widely cultivated flowers the whole world over. According to the fossil record, we can trace the history of the rose back 35 million years. And there are over 150 species grown in countries all around the globe, from Alaska’s hardy Rugosa roses to Morocco’s “Valley of Roses” in the far hotter climes of northwest Africa.

Most species we know today originated in Asia, as roughly 5,000 years ago garden cultivation of roses began in China. The blooms and seeds were then traded all over the world. Throughout the centuries they have been part of mythology, medicine, and even war.

Interested in sending some red roses for Valentine’s day or another holiday? Check out our article about the best online flower sites, or use these links to shop for red roses through ProFlowers, 1800flowers, FTD, Teleflora, Bouqs or From You Flowers.

The History of Red Roses

One of the earliest ties between the red rose and its modern day meaning of love goes all the way back to Ancient Greece. In Greek mythology, roses were created by Aphrodite, the Goddess of Love. Greeks believed that the first rose bloomed when she found her lover, Adonis, mortally wounded by a wild boar. Her tears mixed with his blood, and when they hit the ground a large, fragrant rose bush began to grow and bloom.

In Roman mythology, the story goes a bit differently. Venus, Goddess of Love, was rushing to warn her lover Adonis about a murder plot against him. In her haste, she ran through a thorn bush, cutting her ankles on the sharp thorns. Everywhere her blood touched the bush, brilliant red roses began to bloom.

The word “rose” also has a root in Roman myth. The story says that the Goddess of Flowers, Flora, while in pain from the sting of Cupid’s arrow, mispronounced the word for romantic love, “eros” and it sounded like our modern word, “rose,” and the terms became intertwined.

Red Roses Beyond the Classical Era

Skipping ahead a few centuries, roses were very popular in medieval times. They were often seen as symbols of power and courage, as well as love. Many medieval rulers cultivated roses in their gardens, and Charlemagne, in particular, was known to be fond of the rose bushes growing at his palace at Aix-la-Chapelle.

During the crusades of the 12th and 13th centuries, it was common for knights returning from the Middle East to bring roses home with them from their travels. This may account for the spread of many Turkish varieties into northern and western Europe.

In 15th Century England, the War of the Roses was fought over a power struggle for the throne. The House of York, represented by a white rose, attacked Henry VI, whose symbol was the red rose. After years of conflict, Henry VII assumed the throne and united the two symbols into the Rose of England, which can still be seen carved into the ornate woodwork in many Tudor era palaces.