Roses are arguably one of the most popular flower types, but everyone wants to know each color stands for.  We’ve created a handy meaning of rose colors guide for you to answer the question and to give you more context about each rose color type.

If you’re interested in learning more about rose color meanings, keep reading for the details around each type of rose.

Red roses are recognized the world over as a symbol of love, beauty, passion and desire. These associations go back as far as the Greeks. The Greeks originally associated the red rose with Aphrodite, the goddess of love. The story states that she pricked her foot on the thorn of a white rose when her love was wounded. Her blood turned the rose red, in a symbol of romantic devotion and passion. The red rose was also very popular in 15th and 16th century England. That’s when it became the symbol of the newly crowned Tudor king.

Even though red roses are commonly given as a gift on Valentine’s Day, red roses are a great way to express your love and passion all year. They also look beautiful in gardens. Learn about the history of red roses or other kinds of red flowers.

Pink roses are very versatile and can signify a variety of sentiments. They symbolize happiness, admiration, love and gratitude. Pink roses have shown up in many great works of art over the centuries, often as a symbol of an emotion. They were most popular in art and decorations in the Victorian era.  You can’t go wrong with pink roses as a gift for your girlfriend, mom or other loved one. They’re more sweet than romantic, and are sure to make your recipient smile.

Pink roses make a fantastic gift to anyone you share romantic or non romantic love for. Learn about other kinds of pink flowers or the history of pink roses.

White roses have been a symbol of innocence, purity, spirituality and reverence as far back as Greek mythology. Legend has it that white roses were created when Aphrodite rose emerged from the sea. The story says that all of the sea foam that fell from her body turned into white roses. The white rose was associated with both the Virgin Mary, as well as the very popular house of York in medieval times. The Yorks who used the symbol of a white rose for their house, fought for many years with the Lancastrians, who used the red rose as their symbol. Historians later called this feud The War of the Roses.

Since white roses are associated with purity, spirituality and even new beginnings, they are commonly used for funerals, weddings and various religious ceremonies. Learn more about the history of white roses or find other kinds of white flowers.

Although orange roses do not have the same lengthy history as some of the other rose colors, they are still a beautiful flower. They’re a great gift and sure to take your recipient’s breath away. Around the start of the 1900s, the people in England started to experiment with crossbreeding yellow and red roses to create orange ones. This new color became popular instantly, and is still a standout.

Since the orange rose is a crossbreed of the red and yellow rose, its meaning is also a hybrid. Orange roses are the perfect gift to express happiness, gratitude, support or to give as a hint that you want a friendship to turn into something more. Learn about the meaning of orange roses or see other types of orange flowers.

During the 1700s when Europeans started traveling to the Middle East they discovered a new rose growing that they had never seen before. They brought these back, and yellow roses immediately became the new must have flower. Even back then, they were used for gardens and gifts.

Yellow roses are the perfect gift to make sure there is no confusion about your feelings. They symbolize friendship and appreciation. Yellow roses are cheerful and can make any desk or home feel sunny & bright with their presence. Learn more about the history of yellow roses or discover other yellow flowers. 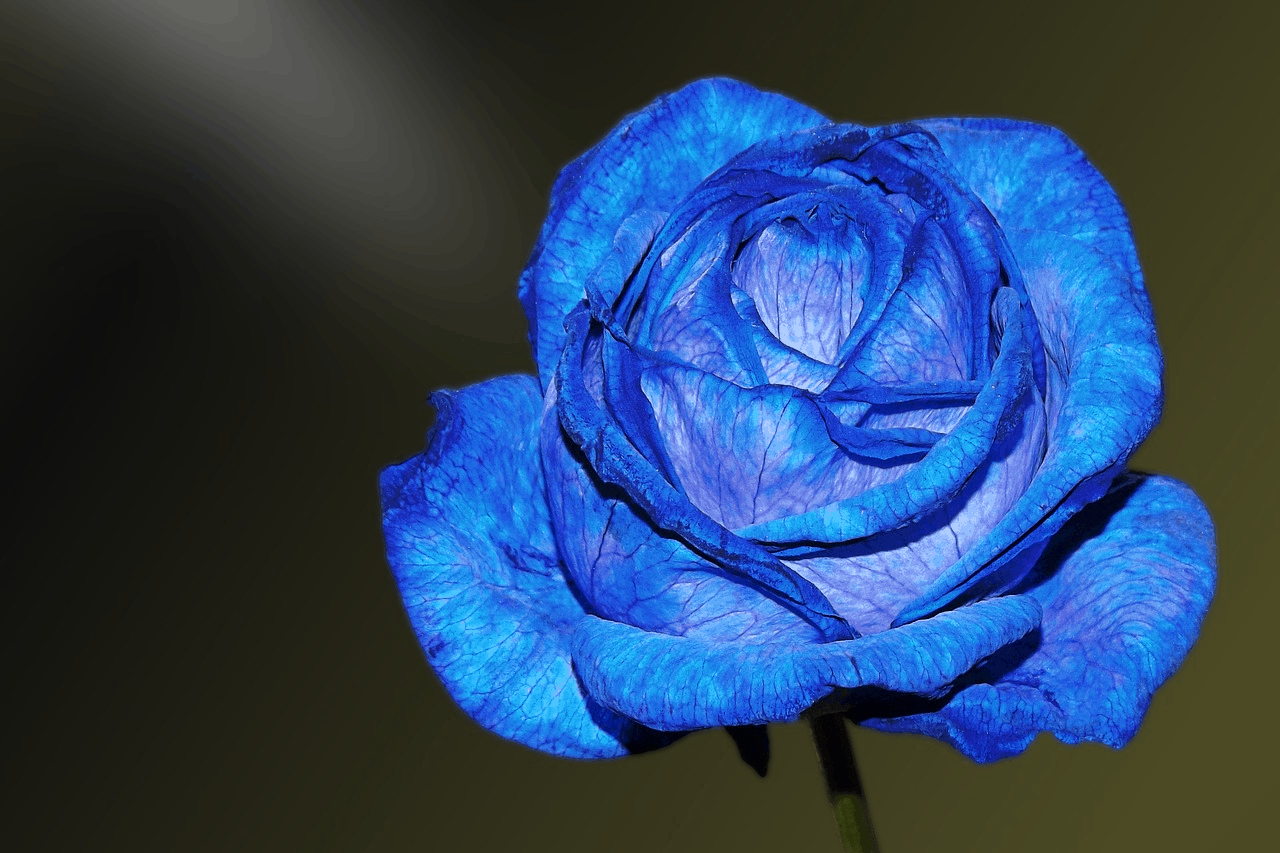 There is no such thing as a natural blue rose, and that is perhaps the reason they are so desirable. Humans want what we can’t have, and blue is a difficult color to find in nature. This has sparked the creation of legends throughout time.

Tales mentioning the elusive blue rose include “Sadko” (Rimsky-Korsakov’s fairy tale opera) and “Arabian Nights”. There is also a Chinese tale about attaining the impossible, called the Legend of the Blue Rose. In this story the Emperor’s daughter promised that she would marry any man who could bring her a blue rose.

Many tried, using blue paint to change the hue of the rose, or offering her pictures. By the end, she chooses to marry the gardener’s son, who has brought her a white rose, which she touches and claims to be blue. This legend has changed in the telling throughout the centuries, and was the basis of the film, “The Thief of Baghdad”.

The blue rose is so desirable that throughout time people have claimed to find them in gardens. Even botanist Ibn el-Awam, in thirteenth-century Arabia, claimed he possessed one. These sightings were never confirmed, and modern academics believe he had mistaken a “Rose of Sharon” or Hibiscus Syriacus.

These legends and the many claims of possession have altered the blue roses. Today they symbolize unrequited or unattainable love. If you do see a blue rose, it is likely the result of dye.

Purple, lavender, or lilac roses are the closest thing in the garden to blue roses. They are often used to express love at first sight. Purple roses may also mean royalty, majesty, or enchantment. This relates back to ancient and medieval times, when purple dye was the most difficult color to achieve. Only the wealthiest and most influential families could afford it.

The shade of purple in a rose makes a difference in its meaning. We tend to associate lighter shades with love at first sight or true love. Darker shades represent deeper, long-lasting love and romance. Since they’re the closest shade to the elusive blue rose, lavender roses are often highly coveted. Legend and time have shaped their meanings. They may represent magic, wonder, impossibility, or a way to express sincere love. 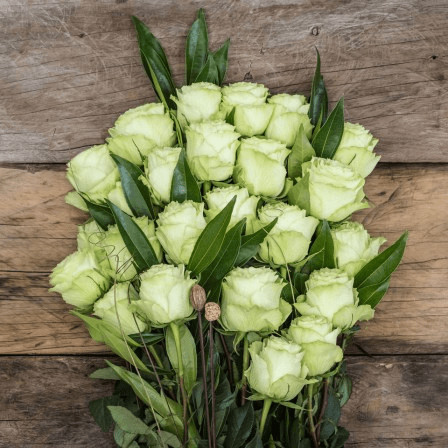 Green roses are somewhat elusive themselves, showing up rarely in nature. The green rose is more like the black sheep of the bunch, and carries little of the meaning of other roses. Instead, green roses take their symbolism from the color itself.

Green is the color of luck, bounty, growth, life, new beginnings, and good tidings. This is because of its close association with fields and harvest time. For centuries, the majority of civilization consisted of farmers and farmland. A good harvest was vital to life, wellbeing, and comfort.

Green land often meant plentiful crops, and was a true blessing. This is also why green roses often represent fertility. The regrowth and rebirth of crops each year meant fertile land, so the color represented female fertility as well. A good, green harvest also meant that the family would have stability, and in turn, peace of mind.

The color green is also associated with money, and therefore can represent plenty and good fortune. If you receive green roses as a gift, the giver may be wishing you luck, rejuvenation, and hope for a good life.

Fun fact – the rose is the national flower of the USA & other countries.

Like this post about the meaning of rose colors? You may also enjoy our meaning of flowers article and guide to making flowers last longer.