The daffodil flower symbolizes rebirth and new beginnings. It became associated with new beginnings (and the coming of spring) because it is one of the first perennials to bloom after the winter’s cold melts away.

Though daffodils, also known as Narcissus, grow in shades of white and orange, they are best known for brightening up the garden with their cheerful yellow hues. 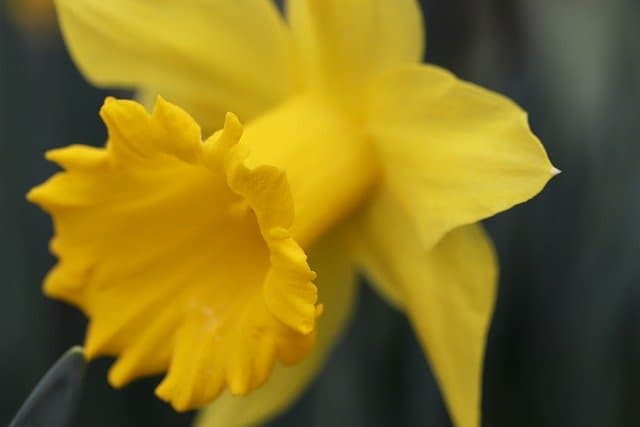 The English word “daffodil” comes from “asphodel.” These flower species are native to meadows and woods in southern Europe and North Africa. However, they are also found in the Western Mediterranean, particularly the Iberian peninsula. The official botanical name of the whole genus is Narcissus, which includes jonquils and paperwhites.

While people in some regions refer to large, yellow Narcissus as daffodils and the smaller, paler versions as jonquils, they all belong to the same family. Daffodils are known as Narcissus because they commonly grow on the banks of streams and rivers where Narcissus perished.

Narcissus was a legendary young Greek man, who was full of himself because the gods had given him the gift of great beauty. One day, a sweet young wood nymph named Echo spotted Narcissus hanging out by a stream and instantly fell in love with him. However, he was so busy being completely self-absorbed that he ignored Echo, and she wasted away from loneliness until nothing was left of her but her voice. Because of this tragic story of unrequited love, daffodils are sometimes used to represent a one-sided love.

Historical accounts suggest narcissi have been cultivated from the earliest times but became increasingly popular in Europe after the 16th century. By the late 19th century, they were an important commercial crop centered primarily in the Netherlands.

Depending on who you speak to, there are between 40 and 200 different daffodil species. The most popular daffodils are mainly named for their cups, the bulbous middle part on the face of the flower.

There are large cupped daffodils, the most popular because they offer a wide range of colors and can be found dressed in white, pink, yellow, red, or peach. Their bulbs can be trumpet-shaped, flat, or ruffled. They produce large, versatile flowers that will fit beautifully into almost any garden setting.

Trumpet daffodils are characterized by their large blooms with a single flower to a stem. Trumpets are the youngest to bloom and can be found in early spring.

Another popular daffodil is the small cupped, whose cups are no more than a third the length of their petals. Each stem holds one medium-sized flower, and they are typically orange and white.

Triandus daffodils, otherwise known as Angels Tears, are a bit different than the rest of the pack. They are delicate, and their petals flare back, grandly exposing the bulb, while the flower itself drapes over. Triandus are very fragrant and brighten up any damp setting. They flourish in habitats where they can hover in their simplistic beauty amongst rock gardens or ponds. 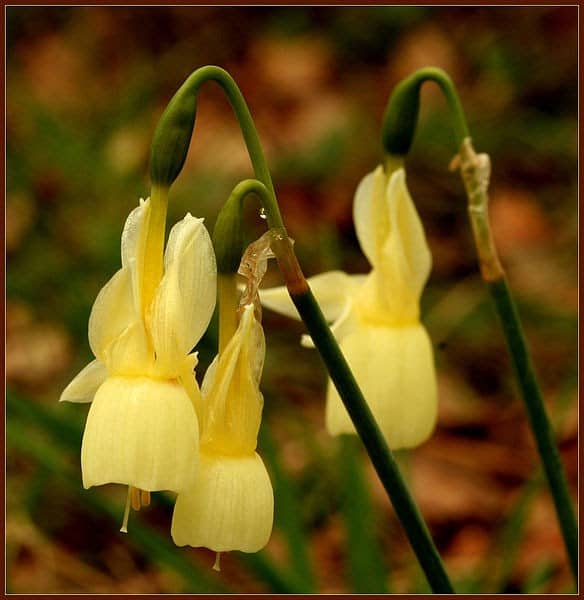 How to Plant Daffodils

Daffodils make gardening easy, and gardening them is a skill for masters and beginners alike. Once they’re in the soil, there’s nothing left to do. These flowers can stay right where they are and continue to produce year after year. You plant them in the fall, and you’ll have your first blooms in spring.

You can plant daffodils in rows, in groups, or individually.

Plant each daffodil bulb so the pointy end, or tip, is facing up.

If you find yourself having a particularly dry spring, water thoroughly at the time of planting, then once a week for the next three weeks. This is a crucial time to water, as the plants are growing their first roots. After the first few weeks, you can leave them be until they begin to grow in the spring. 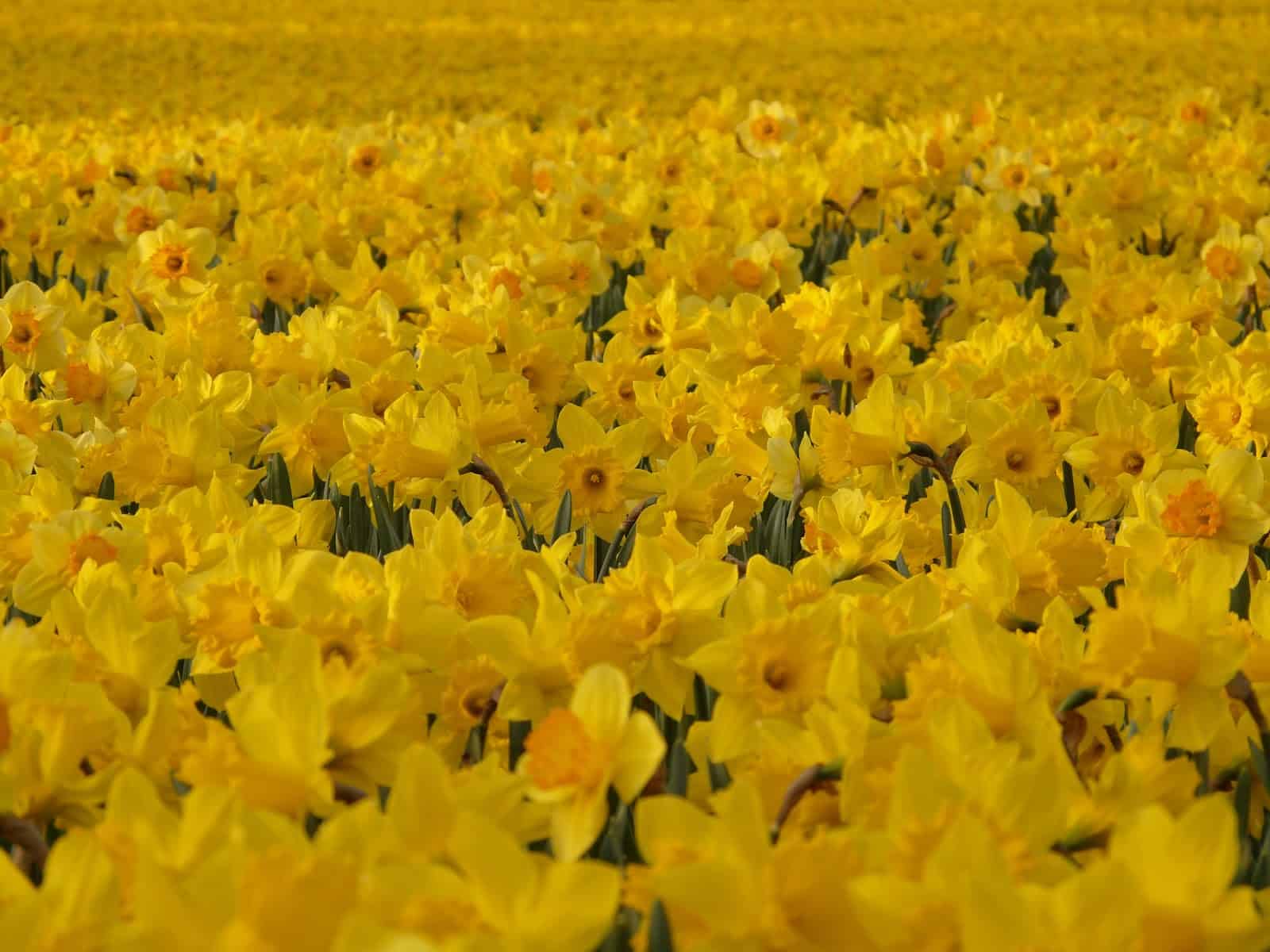 Daffodils can stay in bloom anywhere from six weeks to six months, depending on your habitat. The greatest attribute is you can let their flowers fall, and it will rebuild its bulb for the following year. The leaves will remain green while this is happening, but you can trust your flowers are still growing to their maximum potential, even when they are bare. 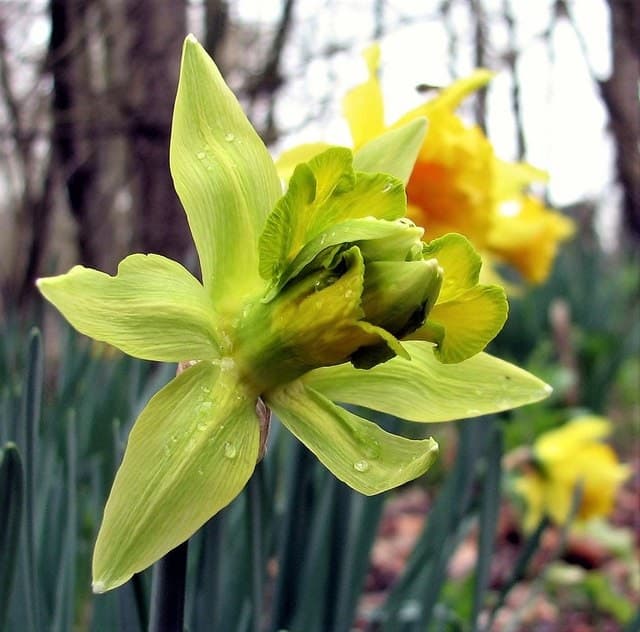 Daffodil flowers have many different symbolic meanings. Some of them are positive, and others not so much. In China, the daffodil is a symbol of fortune. People believe in its ability to attract good fortune and luck. As a result, this flower has become the official flower of the Chinese New Year. In Japan, daffodil means joy and mirth.

In other cultures, the daffodil has positive meanings as well. For example, it is one of the first flowers that bloom in the early spring. Some people say that daffodil is the herald of the spring. It announces to the other plants and flowers that the spring has arrived, and that’s why it’s shaped like a trumpet.

Each daffodil color has its own symbolic meaning.