Dogwoods are highly popular deciduous trees due to their showing colors. Paired with their average height of 20 feet, dogwoods are an impressive feature in any garden. That is to say, they are not like common flowering trees. During their first year, their stems are often purple or green. Older branches are a mix of gray and reddish bark. Their showy flowers, usually white or pink, aren’t actually flowers. They’re actually bracts – modified leaves that surround much smaller flowers.

If that isn’t enough, dogwoods bear fruit. These fruits are shiny oval drupes in a deep red color that ripen in Fall. They’re one of the most brilliant trees you can put in your garden. Read on to learn of the most popular varieties for home gardens and yards.

Where Does The Dogwood Get Its Name? 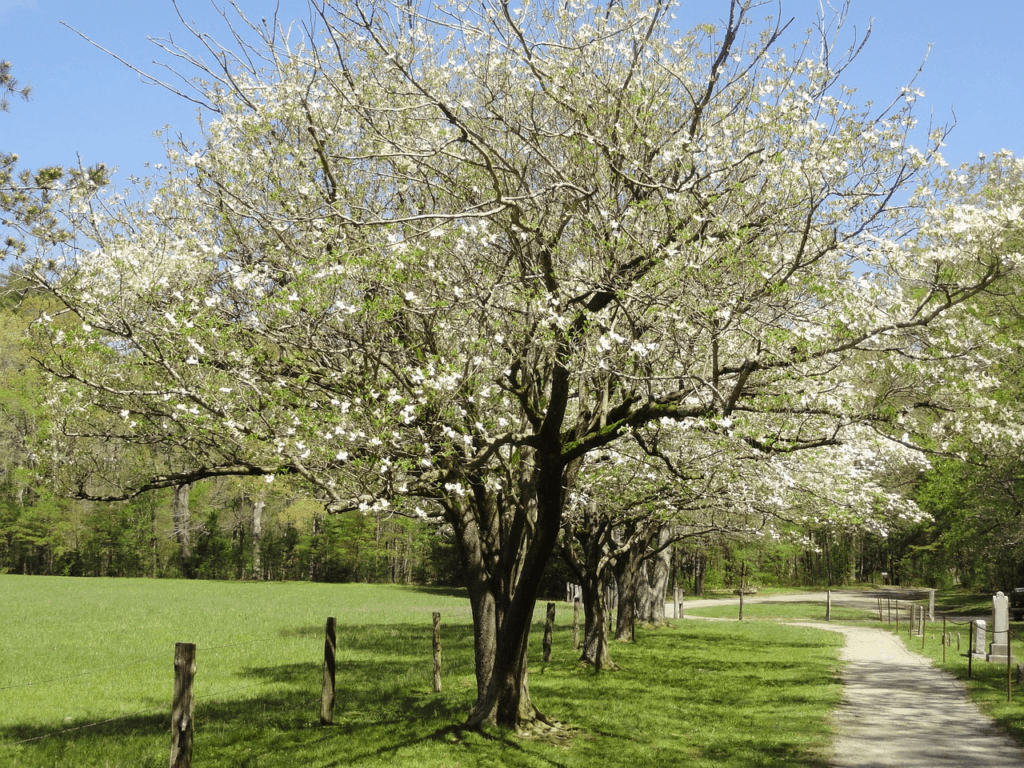 Flowers often have delicate, beautiful names. Trees, on the other hand, tend to get sturdier (blander) names like redwood, birch, and basswood. However, dogwood just doesn’t seem fitting for this beautiful tree. Where did the name dogwood come from, and why was it given to this showy tree? We’re not quite sure.

One option is that the name comes from the Celtic word dagge, a pointed wooden tool. Since the tree’s wood is so hard, yet contains no silica, it’s ideal for making these tools used for delicate work.

Another story is that the name comes from an old veterinary folk remedy. The bark of the dogwood was once used as a treatment for mange in dogs. People would boil the bark and then use the liquid to wash their dogs. Sadly, this isn’t an effective treatment so don‘t try it at home.

What is a Dogwood Tree?

Dogwoods belong to the genus Cornus. This genus contains around 60 woody plant species in the family Cornaceae. Most dogwoods are deciduous trees or shrubs. Though some are herbaceous perennial subshrubs. Still, other woody species are evergreens.

Dogwoods are native throughout Eurasia, North America, China, and Japan. The flowering dogwood is the most commonly planted, due to its showy nature. You may also recognize it by its older, now less commonly used names. These include American dogwood, Florida dogwood, white dogwood, Indian arrowwood, white cornel, Cornelian tree, false box, and false boxwood. 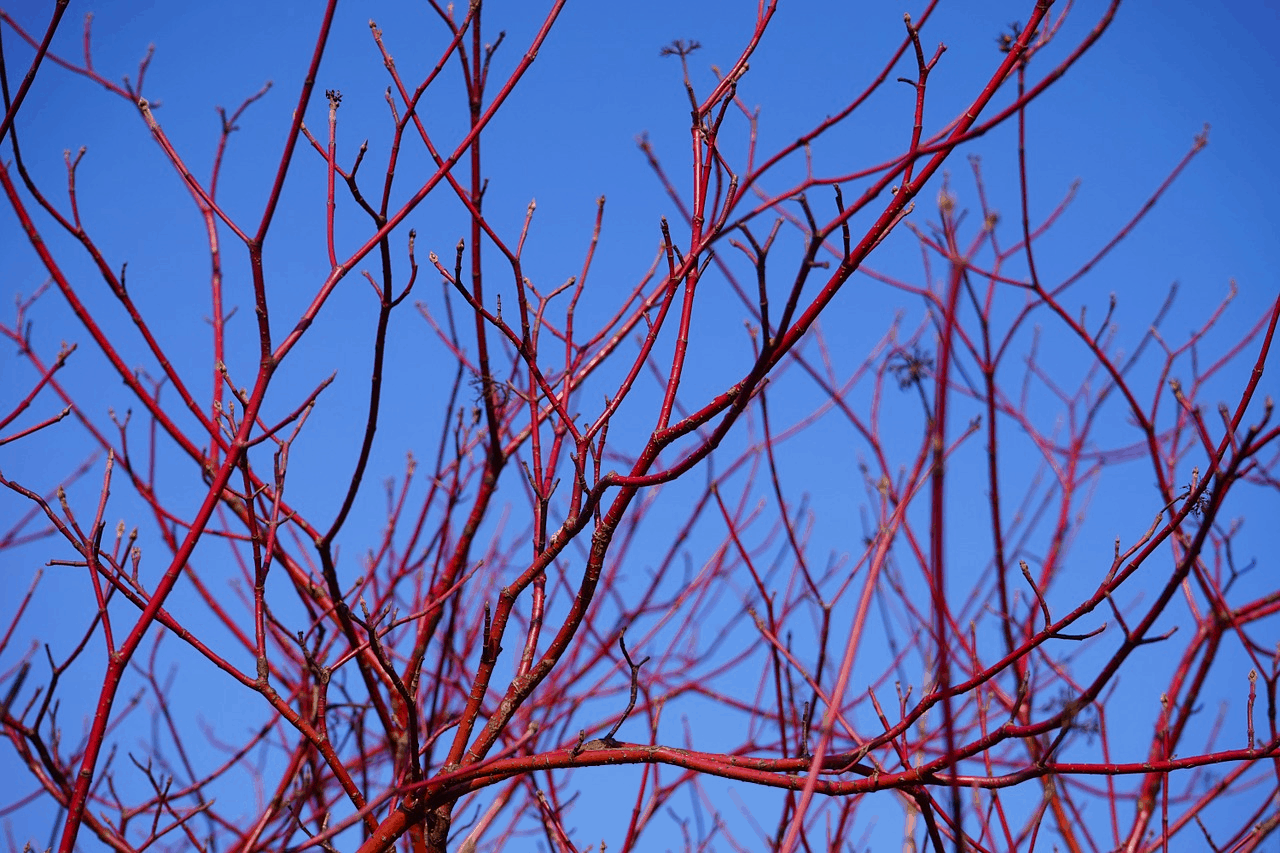 There are 17 varieties of dogwoods native to North America. However, only four of those are popularly grown. The flowering dogwood is the most common and familiar among them. This is because it is exceptionally vibrant, with red fruit and white or pink flowers. Read on to get to know the popular varieties of dogwood and find the one that is right for your garden.

Flowering dogwoods aren’t in bloom year-round, but they do remain an interesting sight to see all year. In the early spring or late winter, they feature white or pink flowers and green foliage. And, in summer their leaves turn a deep red and begin to fruit. Lastly, in winter, the branches keep small, attractive buds at their tips. They can grow to 20 feet tall with a 12-inch wide trunk. They’re a favorite for gardeners all over North America.

Pacific dogwoods are native to the west coast of North America. Their land stretches from San Francisco to British Columbia. It’s a bit taller than the flowering dogwood, growing to about 25 meters. They also tend to stick to the mountains. In fact, they are often called mountain dogwoods instead of pacific dogwoods. Their clustering flowers are a beautiful snow-white. They also feature wide petals (bracts) that make for a true show when in bloom.

Red Osier dogwoods are native to the northern and western regions of North America. Their habitat stretches from Alaska to Durango and as far east as Illinois. As the name lets on, the Red Osier is a very red variety of dogwood with dark red branches and twigs. Because of this, it is also called red brush, red willow, redstem dogwood, redtwig dogwood, red-rood, American dogwood, creek dogwood, and western dogwood. It commonly grows in wetlands or areas with damp soil. They will also grow small white fruit and small flowers in a dull white.

Gray dogwoods are native to the eastern parts of North America. This includes southeastern regions of Canada, Vermont, Maine, and New Hampshire. Gray dogwoods grow best in these areas. They get their name from the gray tint of their leaves, but they do feature other colors. They feature red leaves when young, and their flowers and fruit are white. 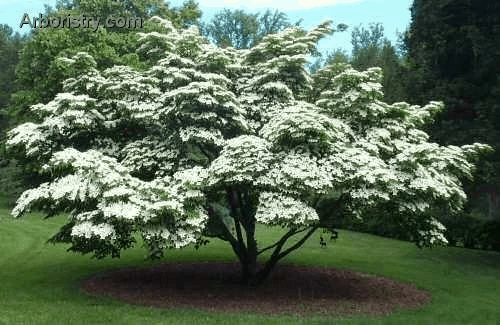 Behind the flowering dogwood, the Japanese dogwood is the most popularly grown variety. They’re cultivated for ornamental purposes, due to exceptionally showy colors and flowers. Their flowers are yellow-green, and the surrounding bracts are pure white. Their fruits are bright pink, but transition to red as they grow.

Pagoda dogwoods function more like a shrub in your garden than a tree. This is because their trunks reach only 6 inches in diameter. And, their branches develop horizontally. These branches form low on the tree, leaving only a foot or two uncovered. Their leaves form in clusters, and their cream-colored flowers cover the branches thoroughly.

Cornelian cherry is a dogwood shrub, or small tree, with impressive yellow flowers. This small, showy tree blooms fairly early. In fact, its flowers show up in early spring, before its leaves have had a chance to sprout. An interesting thing about dogwood species is that its fruit is edible. It’s a great ingredient for liquor, jam, sauces, and even pickles. 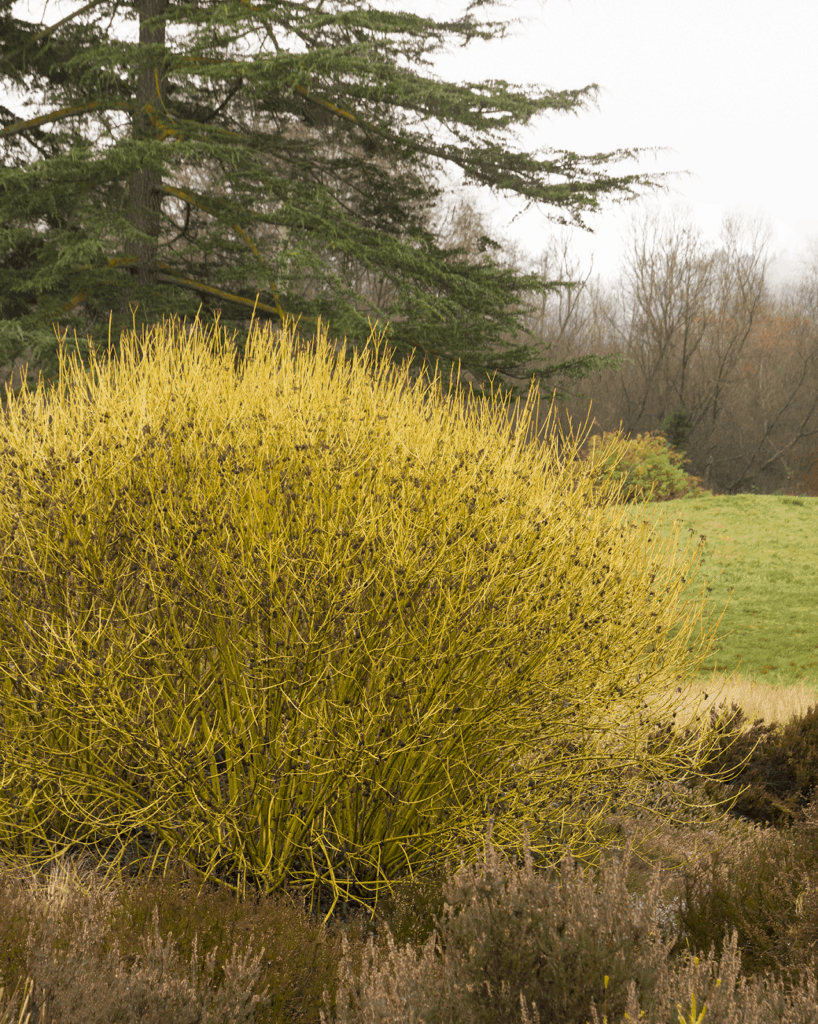 Yellow Twigs are actually dogwood shrubs, rather than trees. They are incredibly decorative. They’re most often placed where they have the most visual impact, such as in front of windows. In spring, their tiny white flowers are there to delight. During summer, the shrub will turn green. In fall and winter this transitions to bright yellow.

Giant dogwoods, also known as the wedding cake tree, is native to various parts of Asia and the Himalayas. It’s a deciduous tree that grows to an impressive 50 feet. It features snow-white flowers, black fruit, and dark green leaves. In the fall, these leaves turn purple-red. They’re a real show if you have the chance to see them. Because of their size, they’re most often used in parks or in coordinated landscaping designs.

The bunchberry dogwood isn’t a tree or a shrub. Instead, it’s a herbaceous subshrub or dwarf cornel, more commonly called a wildflower. This plant stays very low, and spreads its dark-green leaves wide across the soil. While it’s vastly different from most dogwoods, there are similarities. It still has white flowers, and also bears red fruit. During fall, its foliage turns red or purple. If you’re looking for a dogwood that won’t take up as much space in your yard, this is it.

There are a few different names for this type of dogwood tree. These include bloodtwig and European dogwood. It features dull white flowers, blue-black fruit, and attractive red-purple fall foliage. Unfortunately, the fruit on this dogwood is not suitable for consumption. Young plants have red stems, which will last through fall and winter. 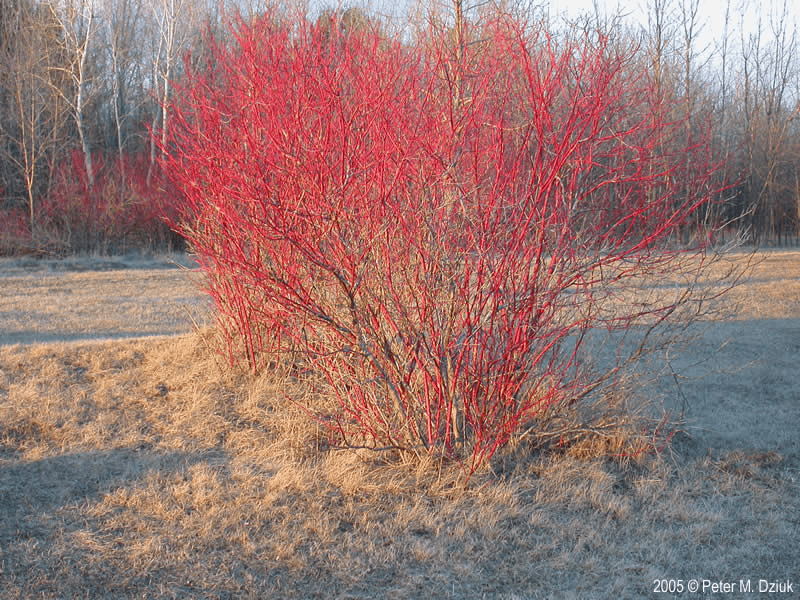 Like other dogwoods, this variety has many names, including red-barked or white dogwood. It isn’t a tree, but rather a surculose shrub, though it can grow as a small tree. It’s often a landscaping shrub due to its winter and fall red stems. During summer and spring, it’s covered in light green foliage with white rims. It blooms with flat, clustered white flowers and produces white or tinted blue fruit.

The silky dogwood is also known as kinnikinnik, red willow, silky cornel, and squawbush. They’re native to most areas of North America. This variety is a deciduous shrub that grows to an impressive 16 feet tall. It features showy foliage and tiny creamy white flowers. It also bears clustered fruits that look a bit like blueberries.

The Himalayan dogwood’s alternate names include Benthams’ cornel, Himalayan strawberry tree, and evergreen dogwood. It’s native to low woodland areas throughout Asia, as well as parts of Australia. It is an evergreen tree that will grow to about 40 feet tall with gray-green leaves. During summer it will bloom with white flowers and produce red fruits.

Brown dogwoods are also called smooth dogwoods or western cornels. They are a large shrub, though also considered a thicket-forming dogwood bush. In tune with other dogwoods, they form clusters of white fuzzy flowers and blue berries. Their bright green leaves also turn red in the fall and remain that way through winter. One of their most unique features is that they grow along the water.

How To Grow Dogwoods 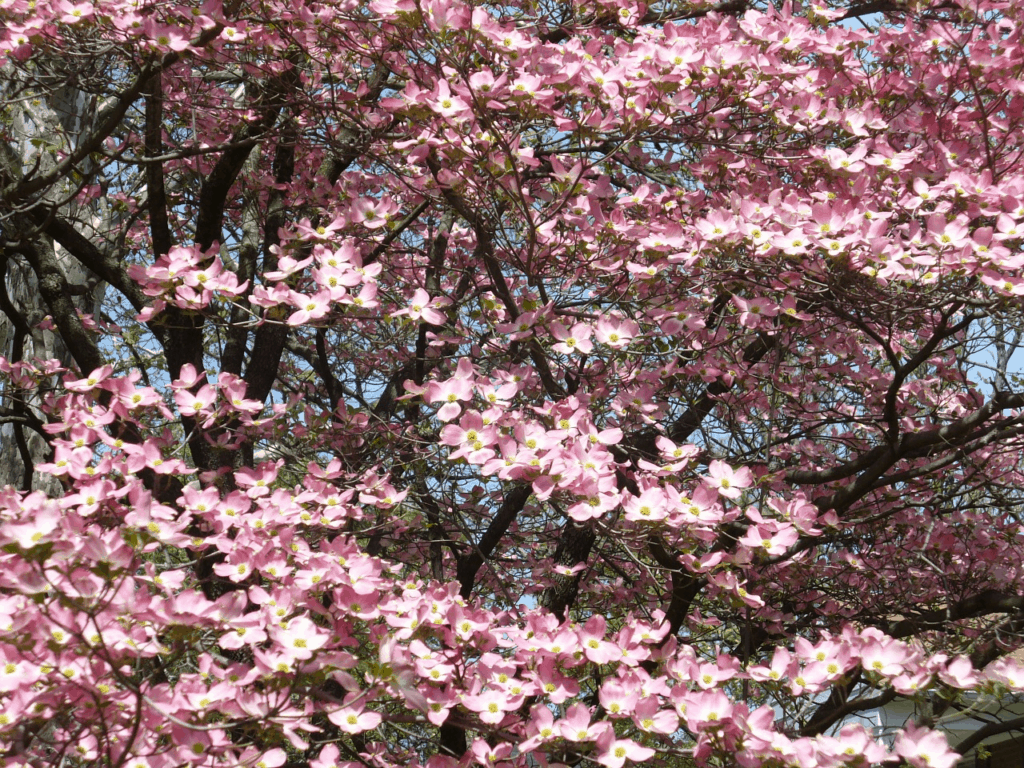 It’s easy to succeed in growing dogwood trees or dogwood bushes and shrubs. All varieties are easy to maintain, and they rarely need pruning. Most can grow in different regions of the United States as well. This, along with their year-round beauty, makes them perfect for most gardens and yards as long as you have room for them to grow.

If you’re interested in growing dogwoods, here are a few tips:

When to plant dogwoods: Plant in the spring, when the soil is still moist.

Where to plant dogwoods: It depends on the variety, but most like both sun and shade.

What type of soil do dogwoods need?: They do best with moist, well-drained, slightly acidic soil.

Dogwood pruning needs: Most don’t require pruning, unless for aesthetics

Dogwood fertilizer needs: Don’t fertilize in the first season. Young dogwoods can die from too much fertilizer.

Dogwood water needs: Water regularly until established, then it will only need watered during dry spells.