Landscaping and gardening can be a great task to take on. You need to consider what plants will fare well in your climate and whether you can provide the best conditions for your garden to thrive. Some plants need more attention than others. One plant that needs a bit less maintenance than others is the barberry.

The most common variety of this plant, the European barberry, is found in places like Europe, central Asia, North Africa, and the Middle East. This plant features gorgeous leaves, flowers, and edible berries. Not only does the barberry make an exciting addition to your garden, but it also has several other health benefits! 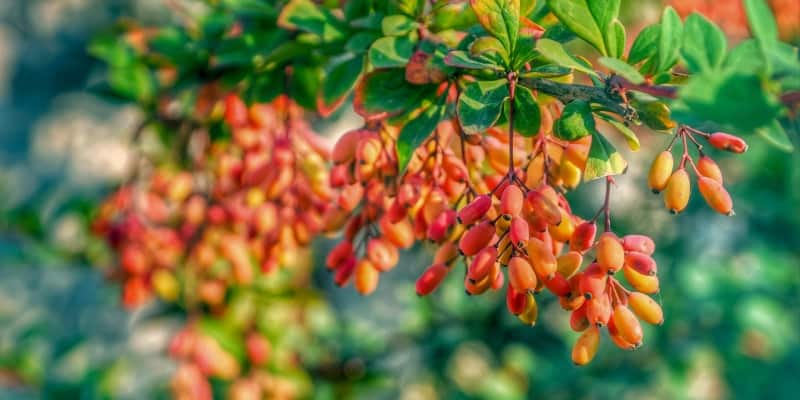 The barberry, or the Berberis vulgaris,  is a medium-sized, woody shrub found in subtropical regions. It has curvy, thorny branches in the shape of needle-like spines. The leaves of this shrub are small and come in various colors like lime green, maroon, and gold. In spring, this shrub looks stunning due to its yellow flowers.

Barberries are great for landscaping throughout the seasons. Their yellow flowers make a great focal point in the spring and their vivid green leaves stand out beautifully in the summer. In the fall, they produce red berries that add that extra aesthetic value to your garden. While these berries are edible, they are quite acidic producing a tart taste.

Some barberry species, like Berberis julianae (Wintergreen barberry), are evergreen – making them perfect for hedging.

There are several different cultivars of barberries and they all have interesting stories about how they came to be in the United States. For example, the European barberry, Berberis vulgaris, arrived in America with the settlers in the 17th century. It became undesirable because this plant turned out to be too invasive and it negatively affected the settlers’ crops.

Later, the Japanese barberry was introduced to the United States in the 1800s. This plant became widely used as a landscaping plant because of its striking features and because it was able to tolerate diverse growing conditions.

These new cultivars also needed to have a lower fruit production so that their seeds wouldn’t spread so easily and the plant would not be too invasive. Some of these new cultivars include Berberis thunbergii ‘Admiration’. This cultivar features beautiful red leaves and cream margins. 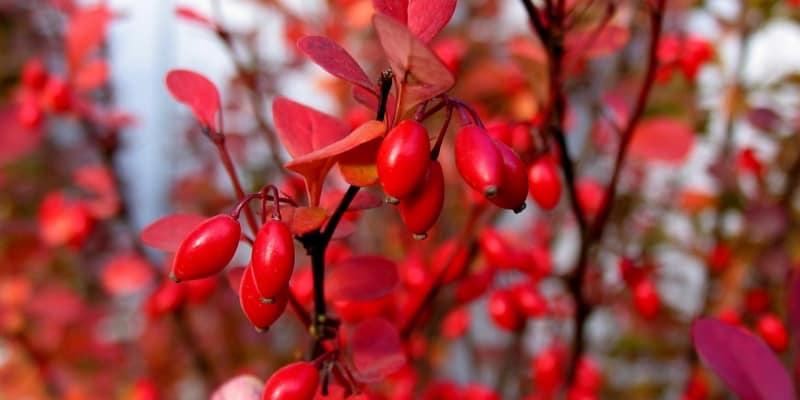 Uses and Health Benefits of the Barberry

Barberries contain several compounds that are beneficial for our health. The most notable of these compounds is called ‘berberine’. This compound functions as an antioxidant and can help with conditions such as diabetes, dental problems, and acne.

Here are some of the practical and health benefits of Berberis vulgaris.

Barberry bushes produce edible berries. These are not very frequently used in Western cooking. However, they are quite popular in Iran and Russia. In Iran, they are often used as a flavoring for poultry, or they are cooked with sugar and added to rice. In the markets in Iran, they are often sold dried out. They are referred to as “zereshk” in Persian.

In Russia, barberries are sometimes used to make jams. Most of the time, they are mixed with other berries in jam-making. Barberry extract is also commonly used as a flavor for candy and soft drinks.

Barberries are indeed edible and are full of nutrients that can benefit our health. They are a great source of Vitamin C, iron, fiber, fat, proteins, and carbohydrates.

Barberries also contain several trace elements such as zinc, manganese, and copper. These elements help with the immune system and can prevent diseases.

The berberine in barberries may help manage diabetes. Berberine can improve how your cells respond to insulin which helps lower your blood sugar levels.

Researchers found that the effects of berberine on blood sugar are similar to the effects that traditional diabetes medication has. However, this study used barberry extract. No evidence shows that simply eating barberries would be sufficient in helping to manage diabetes.

More study is needed to find out the true effects of barberries on diarrhea. However, researchers observed that the berberine in barberries helped people with irritable bowel syndrome. The high concentration of berberine may inhibit receptors in your gut, which prevents diarrhea.

Berberine continues to boast several benefits with its anti-inflammatory properties. Barberry extract can help treat dental diseases such as gingivitis. In one study, researchers found that applying barberry dental gel for several days helped to reduce plaque and gingivitis.

Due to berberine’s antioxidant properties, it may be able to fight oxidative damage linked with the development of cancer. It may also be able to prevent cancer cell replication.

In one study, berberine was able to prevent tumor growth. However, more study is needed to properly understand the benefits of barberries in the treatment of cancer. 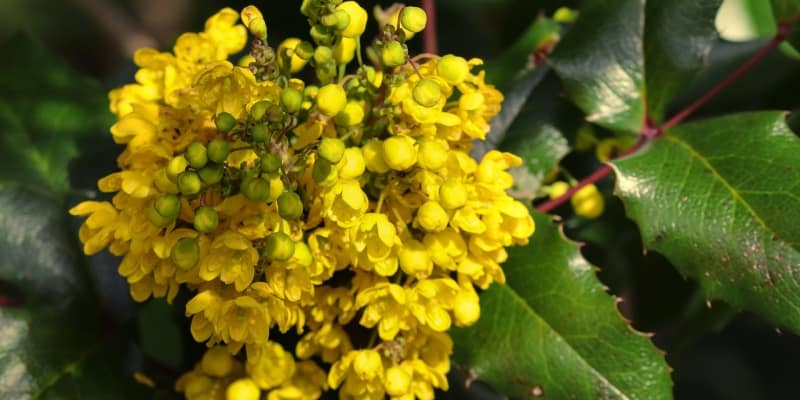 How To Grow & Care For Barberry

Barberry bushes are very easy plants to look after. You just have to be a bit careful because many of the different species feature sharp, spiky thorns! So, if you have sensitive skin, be sure to wear your gloves when caring for your barberry bush.

It is important to make sure that you water your barberry bush sufficiently when you first plant it. Once the plant becomes established, it can withstand fairly dry conditions. However, you must ensure that you keep your bushes watered during times of drought.

If there has been insufficient rain in fall, make sure you water them before the ground freezes. During very dry months, you can run your sprinkler for about thirty minutes every week. Adding organic material to your soil will also help with water retention.

Older, established barberries do not require regular fertilizing as long as they are mulched regularly. You can simply apply a slow-acting granular fertilizer every year. In early spring, sprinkle a handful of fertilizer on the soil under the bush.

The only time you need to prune your barberry bushes is when you want to remove any dead or diseased branches. Of course, if you wish to neaten up the branches, barberries respond very well to shaping. This is why they make good hedges. You can pinch back new growth in the spring to tidy the shape of the hedges and to encourage branching.

The type of soil used for your barberry is not necessarily important. The key consideration should be how well the soil drains. Well-drained soil is essential! If the roots of the barberry sit in too much water, this could lead to root rot and kill your plant.

The barberry benefits the most from full sunlight. However, it can tolerate a little bit of shade. To achieve dense foliage and color, ensure that your shrub receives at least seven hours of sunlight per day.

Planting in a container

If you are unable to plant your barberry directly into the ground, or you simply want to be able to move your plant around, you can certainly plant it in a container. Make sure that there are appropriate drainage holes in your container. The soil must be moist but not constantly soggy as this could lead to root rot and diseases.

Select a container that will allow two or three years of growth before you move the barberry to a bigger pot. So, the container should be about eight inches larger in diameter than your plant’s root ball.

You don’t need to have a green thumb to successfully introduce the barberry to your garden. This plant is relatively low-maintenance and you will reap many rewards from its beneficial fruit.