If you’re interested in Japanese culture, or just someone who watches a lot of anime, you must know that cherry blossoms hold great significance in Japan. They’re one of the country’s national flowers, with special festivals and rituals dedicated to them.

But the reason behind these celebrations has more to do with the flower’s spiritual meaning than its beautiful appearance. Therefore, we’ve decided to uncover the secrets that make the sakura such an important symbol to the Japanese.

What Exactly is the Cherry Blossom? 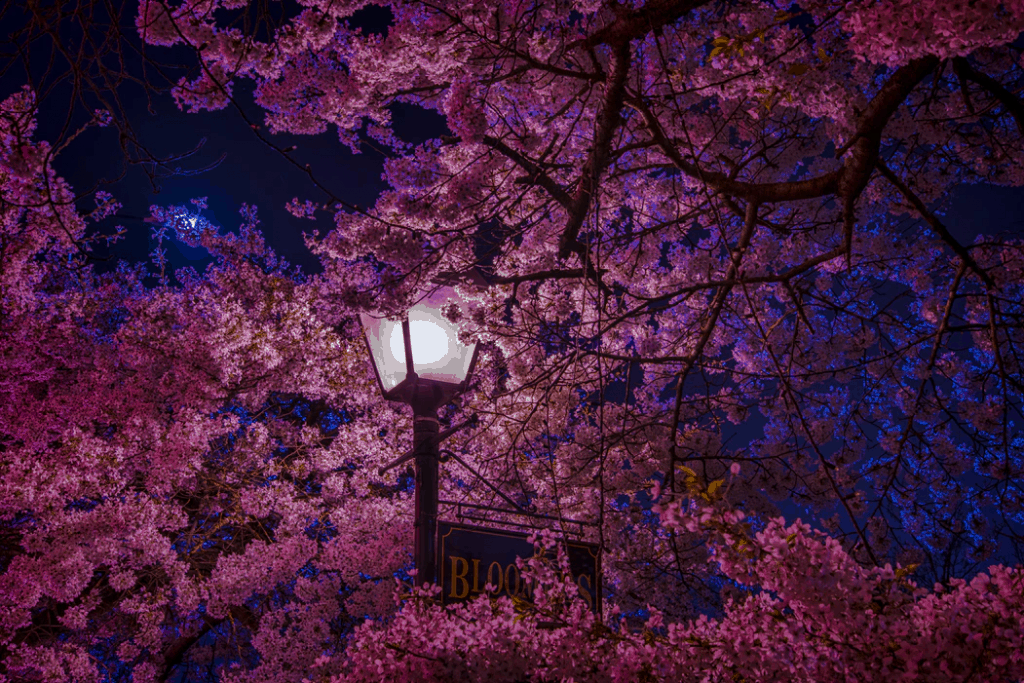 Cherry blossoms, or sakura in Japan, are tiny, delicate flowers in a pale pink color. They’re an offspring of cherry blossom trees, and they only have their springtime full bloom for two weeks.

By the end of these couple of weeks, the little flowers begin to fall from the trees into the streets in a charming spectacle. Soon enough, they wither away as fast as they’d first appeared.

This is the first reason why many people hold an interest in them. They’re only around for so long, and their rare appearance makes them unique.

Even though most people think they’re exclusive to Japan, they’re actually native to other Asian countries. For example, you can find cherry blossom trees in China, South Korea, and even India.

Nowadays, you can find them all over the world. 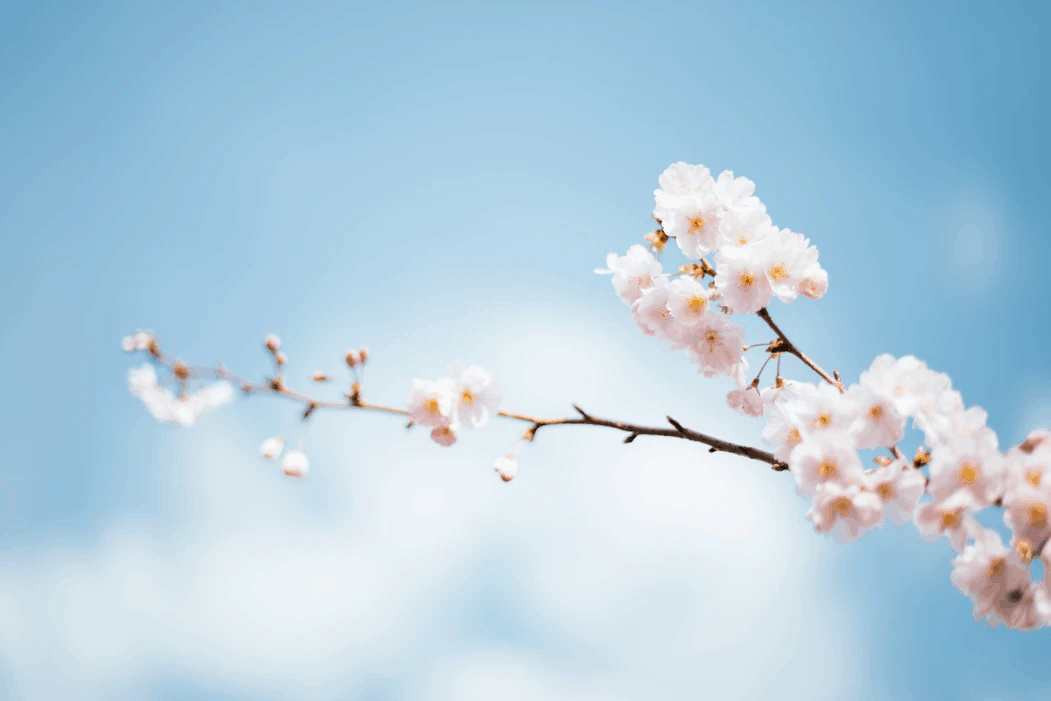 The Significance of a Cherry Blossom

These small flowers can represent a wide array of meanings and have been a recurring theme in Japanese art and history. They even have a ritual of their own dating centuries back, which we’ll discuss later on.

For now, let’s explore the different meanings that cherry blossoms are a reflection of in Japanese culture.

A Metaphor for the Human Life

The short life cycle of cherry blossoms is considered a metaphor for human existence. This theme is strongly affected by the Buddhist belief and view of life, where humans are encouraged to live in the moment.

Just like the 2-week lifespan of cherry blossoms, our days pass in a blink of an eye before they come to an end. According to Japanese folklore, cherry blossoms should remind us to cherish the best parts of our lives and not forget to appreciate the beauty in everything.

People can waste entire years under the mercy of a soulless routine and neglect the warmth and joy of spending time with the people they love. Eventually, they’ll be surprised about the amount of time that they’d spend stressed or worried.

A Japanese Symbol of Both Beauty and Mortality: Sakura

Sakura is the embodiment of both beautiful existence and inevitable death. The philosophy behind it teaches us not to fear mortality but rather to embrace it and celebrate the short lives that we’ve been graced with.

In fact, this perspective is pretty close to the samurai’s view of life. See, these Japanese legends lived by a moral code of discipline and honor, and they valued their existence and their deaths.

This is because they were always in battle. Therefore, they had to grasp into life’s best moments and look for the beauty in everything.

To each one of them, a fallen cherry petal was a symbol of the end of a legendary warrior who had led a life of honor and pride.

Following their ancestors’ lead, the Japanese soldiers painted cherry blossoms on their mission planes in World War II. Thus, if they were to die, they’d fall just the way cherry petals did at the end of their season.

However, these days, sakura does no longer reflect such self-destructive behavior. It’s mainly appreciated for its spiritual and philosophical meaning.

A Representation of Renewal

Cherry blossoms carry an even deeper meaning than the ones we’ve mentioned. They actually represent another aspect that you’ll find ingrained in Japanese culture, which is rebirth.

Because their full bloom marks the beginning of spring, they were considered a sign of agricultural reproduction.

Centuries back, cherry blossom trees used to grow on the mountains first, which the Japanese would climb every spring to worship the trees. According to their beliefs, these pretty flowers represented the mountain deities.

Ever since cherry blossoms were seen as symbols for a new beginning since they signaled the start of spring, they embodied hope and a bright future to come. 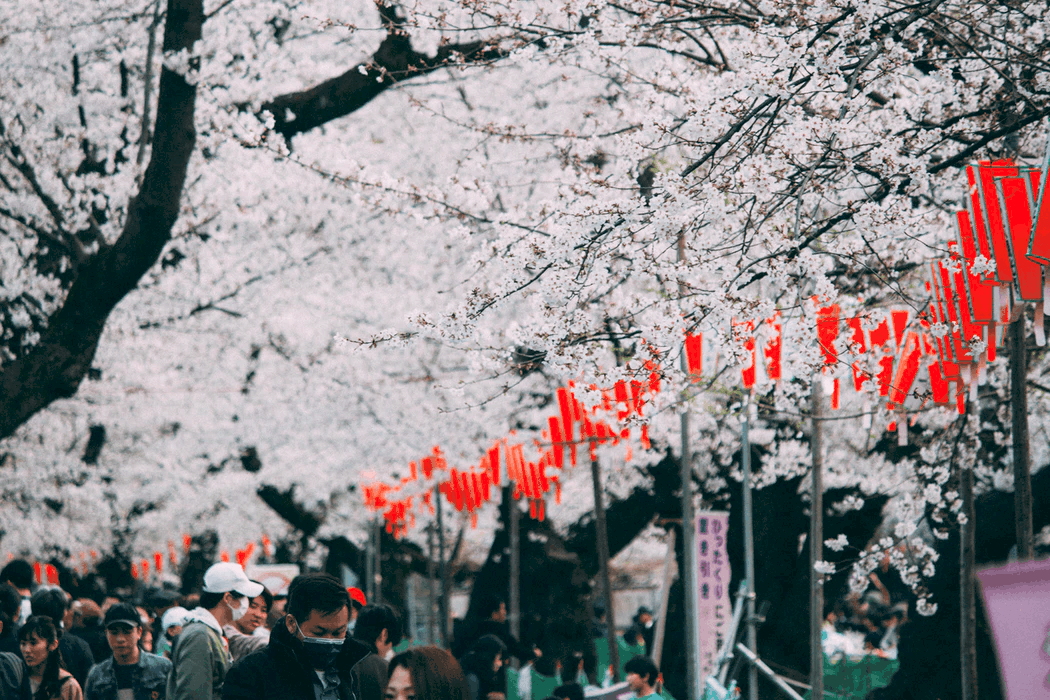 Hanami is a springtime ceremony that’s widely celebrated in Japan. Its roots extend far beyond just acknowledging the beginning of spring.

See, each year at the time of the full bloom of cherry blossom trees, the Japanese gather with their loved ones under this striking canopy. They have food and drinks, but most importantly, they seize the day.

Each of them reflects on their life and its meaning and lets go of their doubts and fears. They remember those who they’ve lost, and together, they remind each other to hold on to the best parts of their lives.

At the end of the day, what really matters is to welcome the future with wide arms and hope for the better no matter what.

During this ritual, the Japanese become one with cherry blossoms.

Where You Can See Cherry Blossom Trees

As we’ve previously mentioned, cherry blossom trees are native to Asian countries, Japan being the most popular one. Ultimately, there are thousands of those trees there, gracing its people with their lovely existence.

However, it doesn’t matter if you can’t afford to travel to Japan to witness cherry blossom ceremonies. During the last century, Japan went on to send cherry blossom trees to many countries as a sign of peace and a fresh beginning.

These lucky countries include:

Therefore, yes, you can still marvel at a cherry blossom ritual without leaving the US border.

The Story of How Cherry Blossom Trees Entered the US

In 1912, Japan sent three thousand cherry trees to Washington D.C. as a symbol of peace, friendship, and political alliance.

Together, the American First Lady, Helen Terron Taft, and Viscountess Chinda, the Japanese ambassador’s wife, planted those trees in West Potomac Park. If you visit the exact spot where they stood now, you’ll find two cherry trees there and a plaque marking the event.

As the years passed by, these cherry blossom trees have gained their own popularity among Americans. As a result, you can now attend the National Cherry Blossom Festival in D.C. to watch those lovely pink blossoms come to life.

This celebration goes on for three weeks, capturing the attention of thousands of locals and tourists.

Cherry blossom season begins with the experts at The National Park Service. They keep a close eye on those cherry trees’ growth and condition to predict the exact time when they’ll fully bloom. They run several tests on the trees while monitoring the weather as well to get an accurate forecast.

After that, the experts release the date when all the flowers in DC’s cherry blossoms should be fully-grown and reach their peak bloom. This gives participants the chance to mark their calendars and get ready for celebrations.

Therefore, if you’d like to witness these glorious activities and have a nice time under these cherry trees, now you have the chance.

Even if you don’t necessarily live in or near the national mall in D.C, you might get your opportunity to participate in the cherry blossom celebration. See, cherry trees have spread throughout the US in the years since they’d first arrived as a gift.

Therefore, you can still enjoy local festivals without driving too far from home. Still, we’re pretty sure nothing would beat the awesomeness that happens in D.C. each spring.

To Wrap It Up

It’s quite easy to be taken away by the view of these pink clouds on top of cherry trees. Yet, their physical beauty isn’t the only thing that makes them special.

A cherry blossom resembles many things, but most of all, it’s a metaphor for the human cycle of birth, life, and death. It’s also a symbol of rebirth, hope, and seizing the most precious moments in our lives.

The next time that you celebrate your own version of Hanami, it might do you good to remember all this. Just like the Japanese, take a moment under this fluffy canopy to reflect on your life.

Don’t forget to appreciate everything you have. Your family, loved ones, or even a delicious cup of coffee in the morning can mean so much if you pause your busy life enough to feel grateful.

At the end of the day, we’re all sakura.