You may not know it, but certain flowers and plants actually have a pretty good reason for being poisonous to those who come within their proximity. Much like small or defenseless mammals and other creatures in the wild, some plants and flowers contain toxins as a means to keep themselves safe from those who might dare to touch them, pluck them, or uproot them from their forest or tropical homes.

The toxins contained in poisonous plants, flowers, and some other forms of foliage are not always contained in the same part of a plant’s anatomy. That’s because — almost as if they have artificial intelligence — these plants are “aware” of where people and animals are most likely to touch them. For this reason, toxins may be found on the bark, thorns, spikes, or cuticles of a plant or flower.

If you’re not aware of exactly which plants are dangerous, and exactly where on their anatomy these dangers lie, you may have just become prey to a beautiful blossom. While it is certainly true that some plants and flowers are only mildly toxic, resulting only in mild skin irritation, others can be quite deadly. And, in the ultimate irony, these highly potent blossoms can oftentimes be the most beautiful, as if taunting you to touch them.

For this reason, it is critical that you know exactly which plants and flowers are poisonous to humans, cats, dogs, birds, and other household pets. Let’s take a look at the most poisonous plants and flowers, their features, and some of the warning signs associated with having come in contact with them.

Appearance: The castor oil plant is a reddish-green flowering perennial shrub with hollow branches, and is typically about three meters in height. Its blossoms are erect and spike-like and bear green to reddish-purple fruit.

Hailing from the Euphorbiaceae family, the castor oil plant is commonly commercially grown and harvested for its — you guessed it — castor oil. While it is true that castor oil is safe and commonly used for everything from treatment of dry hair, dry skin relief, as a base for massage oils, and even for the almost immediate relief of constipation, the plant itself contains highly toxic seeds.

However, like many other highly poisonous plants, castor oil plants are quite appealing to the eye and are therefore frequently used in landscaping across the world because they are perennial and exceedingly beautiful when they blossom.

Though we’ve already mentioned it here, it bears repeating that the entire plant is poisonous, so if you plan on tending to castor oil plants in your own yard, be sure to wear gloves before touching them.

Appearance: Often mistaken for onion bulbs, daffodil plants will grow to be nearly 100 centimeters in height before flowering, then die at the onset of yearly summer heat. Daffodil flowers bear six petals each and contain a central, singular tube-like pistil, while their leaves have a basal sheath and a long, slender, green appearance. Blossoms typically grow either in fragrant clusters or as single yellow to white flowers.

Well known for their springtime beauty, the herbaceous perennials we call daffodils can poison humans, dogs, cats, other household pets, and even farm animals such as horses, cattle, goats, and chickens. The toxic parts of these flowers are the bulbs, which contain poisonous oxalates as well as scillitoxin and lycorine, both of which are noxious alkaloids.

Symptoms of daffodil poisoning include:

Simply touching the sap of a daffodil may cause irritation of the skin and eyes, so be sure to flush these areas with water as soon as you realize you have come in contact with this substance.

Appearance: As a small tree, angel’s trumpet only grows to be about 10 to 14 feet in height, and it bears large, pink and green blossoms shaped like trumpets prone to flowering completely in the summertime, creating a canopy that can span anywhere from 10 to 15 feet wide.

With a heavenly alias like angel’s trumpet, this petite flowering tree’s dangers are hidden in its beauty and its name. And, like the castor oil plant, it is the entire plant that is toxic, from root to trunk, from branch to leaf, and from flower to seed.

This highly noxious plant contains three dangerous alkaloids, including atropine, hyoscyamine, and scopolamine. The good news is that you would have to eat a large quantity of angel’s trumpet leaves or flowers to be poisoned. The bad news is that mere inhalation of flowering blossoms can be as harmful as eating a large quantity of its leaves. For this reason, angel’s trumpet is something every gardener or outdoorsman or woman should be aware of and steer clear of.

Because of their beauty, angel’s trumpet trees are often used in landscaping, so it’s vitally important to be aware of their dangers.

Symptoms of angel’s trumpet poisoning include: 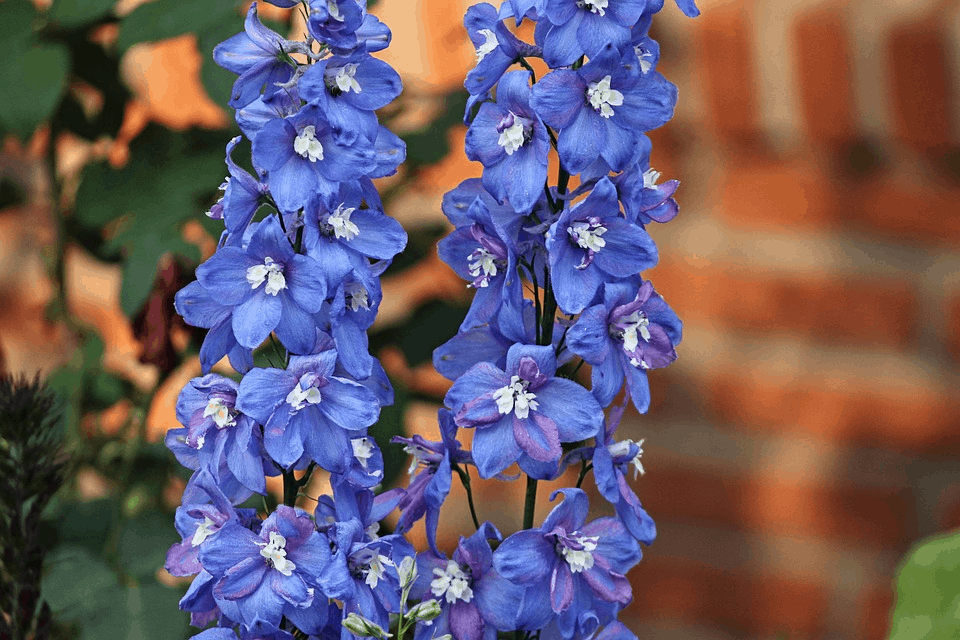 Appearance: Irregularly shaped blossoms in a variety of colors, including violet, blue, and even white arranged in a vertical, yet loosely held together fashion are the hallmark of the larkspur plant and flower. Unlike many other common flowers, the larkspur has a rather complicated anatomy, and its blossoms contain not only petals, but sepals, which are the protective part of the flower bud, typically appearing green in color.

While poisoning in humans caused by larkspur is not all that common, we bring it to your attention here because it is highly toxic to animals. Most commonly, we hear about larkspur harming cattle, but it is also highly poisonous to cats, dogs, horses, and other household pets and other livestock.

The reason harm to humans is uncommon is because we are less likely to eat it than an animal, but the dangers are certainly there if we do consume this plant or its flowers. All parts of the larkspur plant are dangerous, but the highest concentrations of its toxins are within its seeds as well as new growth on each individual plant.

Signs of larkspur poisoning include:

Appearance: As a member of the Araceae family, calla lilies are quite beautiful, and commonly found in all kinds of floral arrangements, landscaping, and even in use as indoor plants. Available in numerous shades such as red, white, purple, yellow, and even green, calla lilies come into bloom at the end of spring and remain that way through the end of summer. Their highly unique arrow-type shape makes them unmistakable, as does the large, yellow spadix, which you’ll always find darting right out of the middle of the blossom.

Calla lily plants are considered dangerous because they contain calcium oxalate crystals, which are a type of calcium salt. Found in much smaller amounts in many leafy greens that humans commonly eat, the amount found in calla lilies is dangerous when consumed in larger quantities — and pound for pound, calla lilies contain much more calcium oxalate than the greens on your dinner plate. Calla lily plants are also extremely toxic to all household pets and numerous other animals, including farm animals and livestock. When consumed in large enough quantities, the toxins found in the calla lily can cause death.

Symptoms of calla lily poisoning include:

There are literally hundreds and hundreds of common, everyday, and even household plants that are highly toxic — so much so that they can easily cause death or severe illness if not addressed quickly enough. For this reason, it is absolutely critical that you know the dangers of every plant and flower you keep within your home and yard, and always watch small children when they are around such plantlife. As soon as children are old enough to walk, they should be warned of the dangers around them in the house and yard, and certainly when they are at the park or camping in the wilderness.

If you have cats and dogs, or even ferrets, birds, or rabbits, it is probably best to keep only benign plants around. But, if that’s simply not possible, constant supervision of all children and pets is the only way to ensure that everyone is safe at all times in the home and yard.